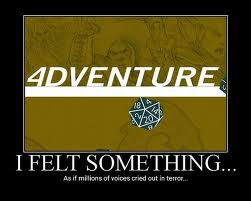 DM: OK!  Here is your pre-generated character for your first time playing D&D here at the store.  Thanks for coming in by the way, and hope you have a great time.

Player: Ummm, thanks! This wizard named Jerren looks good, I think I'll play him him!

DM:  Good choice the party actually needs a controller.  They have got good blast and burst powers.

There has been a lot of talk lately on the net about all the players coming to D&D Encoutners and with the new season of D&D Encounters: The Elder Elemental Eye, I thought it would be nice to post a little bit of rules to clarify burst, blast, and area burst effects.

On your power card there are two types of attacks: close and area attacks.  Anything that says close means the originating square starts from the caster.  A character who attampts a power such as this will not cause enemies who are adjacent to them to attack them. There are two types of close attacks, blast and burst attacks.  Below are examples of close blasts.  The area of the blast must originate from any square adjacent to the character. See the examples below.

The close blast effect folows the same rules for any sized creature.  The origin square must begin in a square adjacent to the creature.  (see below image)

An area burst effect is a little different.  Your power card will usually say something like 'area burst within...'.  this range can be 10, 20 squares away from where you are(see example below).  When a character uses the power you must be careful, because an area burst effect is considered a ranged attack and any creature that is next to you at the time of casting would be able to attack you.

As you can see above, a character would choose a square within range and the effect emanates from that square as if you were standing there.

With all the new players who have joined the gaming world, it is good to simplify the rules to them.  I have posted a simplified explanation of all these effects.