Review: Lord of the White Field 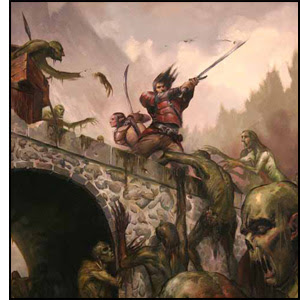 This is one of the series of playtested adventures that I will be reviewing over the course of time.  The Lord of the White Fields is an adventure geared towards character of levels 6-8.  By the end of this module, you should have to level your character if you were level 6-7 and should be really close to level 9 if your characters started at level 8.

Lord of the White Field can be accessed here.  It is only accessible if you have a D&D Insider subscription.  For those that need a pickup game for a couple of sessions, or just want an all out undead campaign, this adventure is great for any of these situations.

Warning:  Spoiler Alert!  The following pages have information that a DM should be looking at to see if this adventure is one to run for their players.

At first glace this adventure looks like your run-of-the-mill undead hack n' slash.  Upon closer observation and upon play-testing, this adventure is more that meets the eye.  The adventurer's begin in the town of Hampstead, where city officials and prosperous merchants approach the party to determine the reason for the lack of communication from their sister town of Brunswick.  The characters, if they so choose, take to the road to Hampstead and are soon thrown into one of the nastiest settings I have ever played in Dungeons & Dragons.  The players fight intelligent ghouls, under the control of Darien the Ghoul Lord.  The players not only have to defeat the ghouls; they also have to figure out clues as to the reason behind all the carnage of the city.

The background (which caught my eye immediately) is quite interesting.  A simple farmer named Darien finds a shiny piece of bone on the ground one day and pockets this idle curiosity.  Unfortunately, this bone piece is planar detrius from the Abyssal domain known as the White Kingdom.  It is a piece of an unfortunate adventurer that Doresain, the Ghoul King, feasted upon.

Soon after coming into contact with the unfortunate farmer, the warping power imbued in the shard of bone brought nightmares to the young farmer.  After seeking help, the nightmares became so overwhelming that Darien could no longer repress the dreams of flesh eating, teeth ripping urges he had within him and began a night of feasting and slaughter that lasted till morning.  In that single night, anything that 'Darien touched' reanimated into ghouls and they in turn hurled themselves upon friends and family to sate their own hunger.  Six thousand people in one night turned into undead ghouls under the command of Darien.

The autor Daniel Marthaler is a genius.  I wish I had his imagination for this type of quality work on paper.  Everything is extremely well organized for this adventure.  All the DM has to do is pick it up, read it and go with it.  Here are some of the strong points of this adventure.

When reading Lord of the White Fields, the background section immediately catches the eye. The DM is almost compelled to continue reading.  He is extremely descriptive in his approach and if anyone has read horror stories that scared them, this one does it well.

The adventure synopsis is fairly straitforward and clear.  The adventurers must go to Hampstead to see what the commotion is about.  The true horror awaits them in Hampstead, and if the DM plays their cards right, can make for one of the most memorable adventures one would play in their lives.

With a good beginning and roleplaying, the quests can lead to intense moments.  Reconsecrating St.Lucian's is probably going to need prompting, unless you have players are those that can think outside the box.  The other, recovering the ring of Beth Harwick, is one of heartache, where the husband of one of the Hampstead villagers pleads to the adventurers to bring back news of his wife.  She has been ghouled and the only humanity remaining on her is the ring which the adventurers are required to return to Mr. Harwick.

The author also gives a table of treasure to award during the adventure and it is up to the DM to hand out the treasure as they see fit.  The table allows the DM to plan ahead of time, which parcels they will hand out, and during which encounter they give them in.  All the DM has to do is fill out the blanks.

The author also includes a section (now this was brilliant) called 'Setting the Tone'.  This section is the essence of why this adventure is by far one of the best I have played.  It is the key between Hack N Slash and excellent roleplaying.  The party must enter a skill challenge every time they move from location to location and this is the time where the DM has to play up the fact that the whole town are now ghouls.  The author mentions things like 'Describe narrow streets where the wind whisles though broken panes of glass and causes a loose shutter to clap against an empty frame'.  Don't just say pass or fail for this skill challenge, instead, 'describe how a loose bit of glass crunches underfoot and causes a ghoul digging in a collapsed building a block away to snap its head up and sniff hungrily'.

The encounters are pretty straightforward, ghouls attacking the party and the party defeating them.  The twister to the encounters are the little things the author adds to make them spectacular.  For example, the author says to play up the town's lost humanity.  As encounters begin, give examples like 'A child-sized ghoul wrapped in the shredded remains of a pink dress and clutching a doll with its limbs chewed off in a clawed hand' is a lot more terrifying than 'ghoul minion'.  It is more terrifying that unconcious, helpless and dead creatures are going to be dragged away by the ghouls for a quick snack.
Encounters in this adventure also include small puzzles that adventurers have to figure out before finishing the encounter.  For example; ghoul minions keep arriving every round until a certain number of non-minion ghouls are defeated.  BEAUTIFUL!!!  Characters actually have to think about  what is happening during encounters, not just the proverbial roll, damage, done!

The author also describes how to play the monsters.  Smart and hungy, attack the weakest and the bloodiest, in order to get a meal to try and sate the constant hunger raging inside.

I do have a couple of small beefs with the adventure.  The first is the most obvious: how come the ghouls have not moved into Brunswick?  Now, bear in mind this is just a small beef.  The timeline seems skewed, but there are many explanations that the DM can come up with if the party ever bring up the question.  You can say that Darien controlled the ghouls within a certain radius etc...

Secondly, is the lack of resting places for the characters.  This is a highly deadly adventure.  There are little to no resting places where the characters will not be interrupted by undead.  I put and 8th level party through the adventure and that was tough for them.  A way around this is to warn your players that this is a marathon adventure and that death of a character is entirely plausible.  This way the characters may ponder and play their character with death in mind.  I think the mortality rate for five, 6th level characters will be high.  You, as a DM, would have to adjust it accordingly for the party you are playing with.

This adventure is, in my opinion, one of the best I have encountered.  It is easy to use, gives great hints at how to play, without hampering the creativity of the DM, is well written and original.  The players will enjoy this adventure for its great marathon challenge.  I would put newbies to the test with the adventure, but experienced players should get a kick out of it.

If you have played the adventure, please leave a comment.  If you have a differing opinion, please do not hesitate to give me your input.
Email ThisBlogThis!Share to TwitterShare to FacebookShare to Pinterest
Review: Lord of the White Field
2011-02-22T19:08:00-05:00
Alton
DM Info|Reviews|
Newer Post Older Post Home
Subscribe to: Post Comments (Atom)