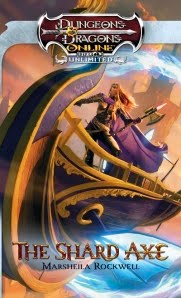 The Shard Axe is a novel written by Marsheila Rockwell and set in the  Eberron world of Dungeons & Dragons.  The novel  is also based on the popular game of D&D online: Eberron Unlimited, a free MMO, popular with the masses.

The novel introduces a down and out on her luck protagonist named Sentinel Marshal Sabira d'Deneith.   Having defeated the assassin Nightshard and ending his reign of terror in the Holds, Sabira has tried to stay away from her  memories of this mission.  Feeling guilty for the death of her partner during this time, and harbouring her anger towards Aggar Tordannon, the dwarf they had sworn to protect, she drinks and gamble to numb the pain.

Little does she know that she would be tricked into returning to the city she never wanted to see again, to defend the dwarf Aggar Tordannon for similar crimes like the ones Nightshard  committed all these years ago.  Even with the Sentinel Marshal by his side, Aggar is going to need all the help he can get.  When Sabira returns, she realizes that something is not right about these murders and must uncover the secrets of these murders to find the true killer.
Weaknesses
Strengths

I have always had a problem reading novels of a fantasy genre with the flavour of romance in it.  The novel has some of this element and I find I really had trouble with some parts of it.  Take for example the Dragonlance novel "The Dragons of Autumn Twilight", the love interest of Tanis and Kitiara just had no place for me in the novel.  I find it slows everything down.

Even with the romantic aspect of the novel, it is a very likable novel, but one I would recommend to read after you get through a few of the Eberron novels. To undertake this one novel without previous knowledge of Eberron would be lost and this may leave a sour taste in your mouth. It is not for everyone.
Sabira is a fantastic character though and just to read about her in this action packed novel is worth the long start of the novel.