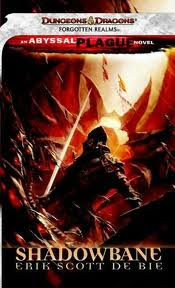 Shadowbane, a Frogotten Realms novel by Erik Scott De Bie, brings us back to the story of Kalen Dren, Waterdeeps' own vigilante.  This novel, set one year after Downshadow, brings us to the plague ridden city of Luskan where any semblance of organization and order do not exist.

In a message delivered by Fayne, Kalen rushes to the aid of Myrin, a girl who went out on her own to find her lost memories.  Having lost an apprentice, and lost his faith, Shadowbane must confront his own demons in order to save a city he hates and a woman he loves.

Relentlessly pursued by gangs, caught up with a young idealist who wants to be his apprentice, and stuck in the middle of the plots of higher beings, this novel promises a non-stop read, filled with epic battles, blind love, and misplaced faith.

Having ached to read this novel after having read Downshadow, I was a little disappointed by all the fluff in the story.  A lot of time was spent dealing with issues that never got dealt with.  I thought the story would be about the plague in Luskan, but the plot jumped around so much that it was hard to tell what the point of the story was.  In the end it was not about the plague, not about Myrin and Shadowbane, not about Rhett, but about Shadowbanes' own discovery of his faith.  I recommend the read, but if you absolutely enjoyed Downshadow, I don't think you will enjoy this one as much.