Water Closets(Washrooms): How Lucky Our Adventurers Are to Not Have to Use Them During Medieval Times! 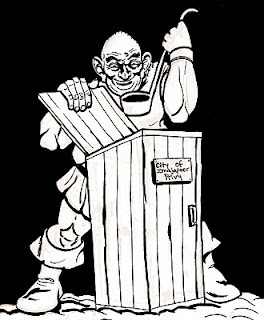 Where do you go in cases like this?  To the toilet of course; where else?  The Romans did humanity a great service by inventing the sewer system, a place where all natural expulsions were collected and diposed of in a neat tidy area.


Unfortunately, those people who grew up in medieval times did not have that luxury.  There was no Wendys along the highway, no rest stops whenever you had to go.  You just went!  Back in the olden days, people used potties or chamber pots.  These pots were kept in the house and once full, or once they needed emptying, you would just open the window and chuck that s*&! out.  Most of the streets at the time had open drains just outside their houses.  These "waste channels" would then carry all the waste to wherever it was directed to.  Not very sanitary if you ask me.  When people flung the waste out the door, they used to cry "Gardez l'eau!", which in French kind of means watch out for the water, warning any passers-by that logs were flying through the air(the literal translation is actually keep the water)!

Here is an example of a chamber pot or "potty":

Many of the towns and houses also had outhouses, or otherwise known as household privies.  These were structures which were usually self-enclosed and a place where you could take a load off.  These structures were usually situated behind the house, taverns or inns.

Here is an example of a household privy:

In the many year of playing Dungeons & Dragons, we have wrestled with bears, killed numerous monsters, saved defenseless farmers, saved kingdoms through negotiations, slept with women, but not once did any one in my party mention that their character had to take a crap.

How lucky our adventurers are to not have to go to the bathroom!  It is assumed that they empty their bladders and bowel when they need to(the non role-playing times).

Imagine how life would be if D&D Next incorporated biological constitutions in the gameplay.
Players are lucky that they do not have to  take care about washrooms.  I can just imagine how gross and disgusting it must have been to not have access to toilet paper, running water, baths or anything else to clean you down in that area.  Everything in the D&D world is all sunshine and flowers.

How lucky you are!