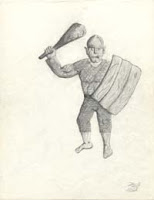 DM: In the distance you spot a cave entrance. You can see a faint light flickering inside.  Bam Bam, you catch a whiff of something foul in the air.  Like a combination of rotting food and dirty socks - it's definitely goblins.
Bam: Me smell goblin. Me like crush goblin.
Magnum: I, Magnum Opus, wish to approach the cave.
Bam: Um... Ya, me like crush goblin.  Me need new socks too.
Magnum: ... (looks quizzically at Bam Bam)
DM: OK, you both start walking towards the cave.  The odor becomes stronger; Magnum you notice it now too.  Magnum, you think you see movement inside the cave!
Magnum: I stop.
Bam: I charge!
DM: Initiative, please!

You don't always have to be original to create an interesting and fun character to play.  Any of you who played the Quest for Glory series of games may remember Magnum Opus from QfG:V, and of course, I think we all remember Bam Bam from the Flintstones.

Both of these 3rd Edition characters of mine died too early.  Given the chance I will revisit them in 4th.

Magnum Opus was a Human fighter.  He specialized in the over sized Fullblade, which he used to make quick work of his enemies.  Like most fighters he was a tank.  Magnum would find the burliest enemy, go toe-to-toe, and dish out the hurt.  All the while speaking his name "I, Magnum Opus..." before every sentence.  If he had a lot to say, this got a little annoying, but for the most part he didn't, so it kept people smiling.  This article is an excellent read on catchphrases. 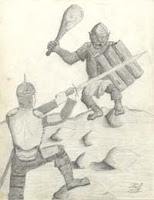 I say, if you're going to do something, do it all the way.  Magnum was great for dishing out massive damage to one foe, but what if I could do it to multiple foes?  Enter Bam Bam.  A Half-Ogre Barbarian, Bam Bam was none too bright (I intentionally put my lowest ability score on Intelligence), but boy could he flatten enemies!  It can be a lot of fun being a stupid brute, let me tell you.  Bam Bam was large enough to handle Large sized weapons, like the Fullclub (an over sized greatclub for Large creatures, much like the Fullblade), and small enough... well... normal enough, to not be a burden in a dungeon.  I took Leap Attack, and Cleave, to get to the centre of the fray and knock them all down.  This made him awesome against smaller weaker foes, but ultimately became the death of him: he was overwhelmed and had no route of escape.  I blame it on my stupidity, not his.

Both questions are arguable, of course.  For me, I like to focus on one aspect of a character and make him really good at that one thing.  Obviously, for both of these characters that one thing was dealing a lot of damage, and believe you me, they were both good at it.  Playing strikers is fun.  Dishing out the hurt is fun.  But what made these characters fun for the rest of my group was how I played these characters.  Being in character while playing the character.  Playing the character's role, striker, and also acting their role.  This can be hard for some people because not everyone is an actor, or feels comfortable opening themselves up in that way.  But with simple mannerisms or speech characteristics, you can sow seeds of becoming your character, if only for a night at a time (and probably preferably so).  What a wonderful escape it is!

About the drawings: These drawings, and the ones I included in my previous post, were all completed by me when I was the ages of 12 to 14.