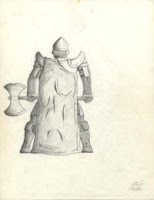 Ever since I was a teenager I have enjoyed creating characters. Sometimes just by drawing a picture, other times only by writing them up. It has only been for the last 8 years or so that I have had a stable group of people to role with so that I have actually been able to play my characters; before that it was just for fun. Now, it's serious! I know, I know... if you get too attached to your character it can be extremely difficult to accept the "Ultimate Sacrifice" should it fall upon you, but I believe that you are more likely to act in a self-preserving, and therefore, more honest way while in character if you have this attachment.

Over the next little while, I will share with you some of my most beloved characters. I will also pepper the dialogues with my drawings; some old, some new. But first, what is it to play, rather, to be a character? What does it mean to play a role? And how does your role fit in with the Party?
Even before character roles were outlined for us in 4th edition, every character class had their role. The basics were in the classes: the Fighter - Defender, the Cleric - Leader, the Magic User - Controller, and the Thief - Striker. Of course as we know, time passed, and dozens of books were published, and all of our shelves overflowed. And at the same time the character choices expanded exponentially, and the lines defining the roles became blurred. It became increasingly difficult to have a balanced party. As a result, when we would all sit down and create our characters, sometimes we would end-up with a party that could be heavily weighted towards one role or another, or completely lack a role altogether. If any of you have had this happen, you know that an unbalanced party can face great challenges, and is not always successful at some encounters. This can be worked around by a good Dungeon Master, but can also result in frustrated Players and dead characters. Therefore, it is imperative that when your group sits down to build their party of heroes, that you all work together to create a balanced party. With this, each member of your group will have the greatest opportunity to flourish at building their Character's character. 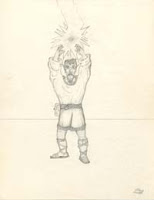 Now that you and each of your group know what role you will playing, it's time to start building the skeleton of your character; choose your Race, Class, and Ability scores. Then add some muscle; Skills, Feats, and Equipment. Lastly, your new character needs his or her skin; a name and a personality. The race you chose can have a considerable impression on the personality of your character. A Dwarf may not have the same temperament of an Elf, or a Goliath, or a Human. The Players Handbook(s) have outlined some traits of each race which you may use to create the personality of your character, but honestly, its up to you. If you want to play a kind, polite, and gentile Dwarven cleric who wears pearls, that's up to you. Its often the absurd and edgy that creates interesting and memorable characters. Go with it. Grab the reins, and saddle-up for the ride.

Your character's name can say a lot about who you character is.  Personally, I like using real world names or concepts which describe to some degree the character I wish to create.  For example, Tysylio, my favorite character I have ever played was a 3.5 edition Bard.  If you were to look-up the name Tysylio, (you may find some alternate spellings) you will find that he was a Welsh Saint of considerable renoun, but also Tysylio surfaces in Arthuian studies.  The Brut Tysilio, arguably written by Tysylio himself, but probably by Geoffrey of Monmouth, is an account of British Kings which includes Arthur.  Thus, being a fan of the Arthurian legend (blame it on Monty Python), I gravitated towards names from that legend.  I was going to go with Geoffrey, but the name is too simmilar to a member of my D&D group, that and Tysylio is less common and sounds cooler.  A cool sounding name is important.

So, now your character has a role, a class, a race and a name.  Now comes the most important part, where he ceases to be a filthy animal: Personality.  And as we know, personality goes a long way.  This is also the most difficult part to conceive.  The PH and Character Builder have various Background options for you to choose from, but leave only free text areas for Mannerisms and Personality Traits.  So, how do you pick 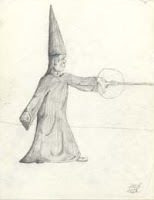 them?  Sometimes its easiest to choose a personality that is close to your own.  Don't do this.  You play yourself every day, be someone different.  Be crass, be gruff, have a speach impediment, have an accent, be funny, be dumb, be pompous, be vain, be modest, be proud, be smart, be an ass, be what it is that you are not.  But don't get me wrong, I'm not saying that if you are a nice person go play D&D and be a disruptive dick.  Just play a character that is interesting, so that it becomes interesting for you and the people you play with.

In my next article I will examine some of the choices I have made, for weal or woe.  I hope that if you are new to role playing you will find them helpful, and if you're an epic adventurer you find them entertaining and insightful.  There is certainly a piece of each of my characters in me, just as there are pieces of each of your characters (or characters to be) in you.
Email ThisBlogThis!Share to TwitterShare to FacebookShare to Pinterest
Character's Character - Basics
2011-04-04T09:27:00-04:00
Tysylio
Player Info|
Newer Post Older Post Home
Subscribe to: Post Comments (Atom)