Everyone Else is Doing It?! 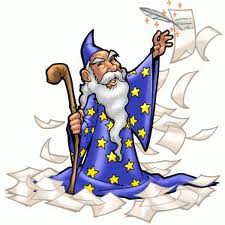 1.  If you had to pick a single invention in a game you were most proud of, what would it be?


The Gem Sorter.  An old character of mine, Onomat Opoeia, was trying to get out of hot water after being caught in the King's treasury.  He convincingly told the King that he was testing his new invention the Gem Sorter (really just filling a sling of gems and trying to release them in their various colours in seperate piles).  My DM thought it was inventive and gave me a chance to totally pull it off, but roled a 1.


The last time I GMed was Friday.  I GM for Encounters and later that evening I GM a 3.5 game.

3.  When was the last time you played?


On Tuesday.  I play a 24th level Rogue (scoundrel) currently in Sigil as part of E2 - Kingdom of Ghouls.  It is right now the only time I get to play.

4.  Give us a one sentence pitch for an adventure you haven't run but would like to.


Six monster races are brought together to work towards the goal of restablishing hold of the goblin lands.  the heroes must eliminate or disband the driving force behind this unusual alliance.

5.  What do you do while you wait for players to do things?


I either encourage them along giving specific time to do things in combat (not a fan of table talk), or will look at my notes to make sure I did not miss anything re:creature powers, or think about board placement and think of tactics I could use in the upcoming rounds.  I think of ways of interacting with the PCs if the battle goes sour for me.

7.  Do you find GMing physically exhausting?


Not physically - mentally!!! Sometimes I get home and crash right away; especially after a brutal night of rules ruling.

8.  What was the last interesting (to you anyways) thing you remember a PC you were running doing?


The last interesting thing - would be when I ended up playing a 15th level Goliath Warden during our P2 - Demon Queen's Enclave stint, having stood up to the whole entourage of Matron Urlvrain.  The only people left standing in the party were myself and the wizard.  The wizard was going head to head with Matron and my warden taking on the rest.  I ended up taking about 375 points of damage from that fight.  It was an amazing fight.

9.  Do your players take your serious setting and make it unserious? Vice-versa? Neither?


My players tend to take the serious seting and keep it serious.  I am a joker and sometimes will inadventantly make the setting unserious.  I kick myself every time I do it.  Sometimes I make up for it by being extra serious for the next one.


Depends on what situation is presented to me as a player.  As a DM, I create goblin society and try to play the moral card with my players.

11. What was the last non-RPG thing you saw that you converted into game material (background, setting, trap, etc.)?


Indiana Jones snake trap.  I used the idea to create a trap that I got published over at Stuffer Shack.

12. What's the funniest table moment you can remember right now?


I remember DMing RttToEE.  We had a necromancer who always travelled with an entourage of 11 zombies.  The rest of the party consisted of a fighter, druid, cleric.  We had to squeeze the wall to walk around the pit trap.  I asked for a balance check from all the players.  The fighter failed his and fell into the pit.  The funny part was at the same time the necromancer ordered his minions to cross the pit.  Out of 11 zombies, 9 fell into the pit, on top of the fighter, giving him more damage as they fell.  It was hilarious.  It was basically raining zombies on the fighter.  We had a good laugh at that one.

13. What was the last game book you looked at -- aside from things you referenced in a game -- why were you looking at it?


The last and current game book I am looking at right now is the Eberron Campaign Guide.  I am DMing a weekend with some guys and the setting I am using will be Eberron.  I have read a few novels in this setting and am fascinated by the world.  I have also just in plain fact enjoyed reading it.

14. Who's your idea of the perfect RPG illustrator?

15. Does your game ever make your players generally afraid?


Once, DMing my homebrew adventure out of Sifnab. The PCs got separated in a labyrinth type room. Two characters died that evening.


16. What was the best time you ever had running an adventure you didn't write? (If ever)


If I were to choose, it would be H1: Keep on Shadowfell.  I had experience in 4th before my other group decided to pull the plug on 3.5 and it was fun to see them pick up the rules and go with it.  Good times!!!

17. What would be the ideal physical set up to run a game in?

18. If you had to think of the two most disparate games or game products that you like, what would they be?


Balderdash, a board game with bluffing and trivia and Star Wars Monopoly.  I don't know why the Star Wars, there is just something about it.

19. If you had to think of the most disparate influences overall on your game, what would they be?


D&D novels.  Reading them stirs the pot for adventures and ideas.  Other blog sites and other people.  Reading gets my creative juices flowing and reading other peoples blogs and speaking to other people, give me direction in what I write.


Sad to say I have not translated any of them in to game terms.

22. I there an RPG product that you wish existed but doesn't?

23. Is there anyone you know who you talk about RPGs with who doesn't play? How do those conversations go?

This one is easy.  I speak with my wife about the game all the time.  The conversation usually begins with her asking me how my evening went.  I respond by giving her details about everything that happened, what certain characters did, how some players pissed me off this week, or how I got frustrted with something, or how something was funny.  This results in her falling asleep most of the time, or her saying how much she thinks D&D is a stupid game.(yet...she keeps buying me stuff for Christmas)  I think she says that just for spite.


Go ahead, take the time to answer the questions.  I had a blast doing it.