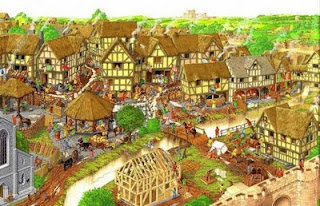 The world is a large place and home to many people and places.  One of the regions renown for its lucrative endeavours is the kingdom of Balstair.  Balstair is located at the west of the known world and includes access to ports of call as well as a its land bound capital of Lorethane.  Sifnab is a little town, a midpoint to the other parts of the kingdom.  It is a waypoint to the shoreline human town of Meat Cove, a mangy place of double dealings and double crossings.  It is also the only way to Lockport, the lucrative agricultural and trading center of Balstair. The small town of Sifnab is relatively small but can cater to any need for caravaneers to and from Lockport or Lorethane.

The kingdom of Balstair lives in relative peace with its westerly neighbours, prospering in heavy trade with neighbouring kingdoms and treatese of peace with all the races in the kingdom.  However, as with all nations, many plots and schemes threaten to destabilize this balance. 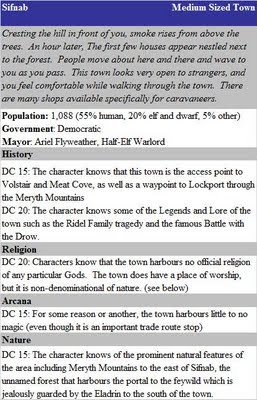 Sifnab is a quiet little town of approximately 1100 people.  This waystation provides many services for the caravans passing through the town.  The population is relatively stable and is laden with many transients from all over the kingdom, transporting goods, foodstuffs, materials to all over the area.  Since the land surrounding the area is quite wild, it has been very difficult for roads to be built and maintained.  The mountains make it near impossible to navigate through.

Sifnab has many shops and services available to caravaneers who pass through the town.  Here are some of the most commonly used and the owners or operators of the establishments.

There are 4 inns that service the travellers.  The first two are of sound quality and a little more expensive.  The third one is pretty average and the last one is seedy.
SERVICES

This sad story begins with a man and his dream.  Therid Ridel, was a soldier for the army of Lorethane.  A talented individual who quickly became a lieutenant in the army.  During his climb into power he met and married Anna, a poor girl whom he rescued from a goblin raid in Sifnab many year ago.  Not wanting to live any longer in Lorethane, he transferred to the militia of Sifnab and built a house on the outskirts of town.  The Ridels had three children; Belinda, Amanda, and Timmy.

One night while the family was sleeping, the house was lit afire by one of the goblin survivors of the battle in where Therid routed the attacking tribe of goblins. The whole Ridel family perished in that fire.  This was only three years ago.  Rumours have it that Therid and his family still haunt the burned out place that was once their home.  No one has visited the house since the funeral.

Living so close to the mountain proved to be disastrous for the town of Sifnab some fifty years ago.  No one knew that there was an entrance to the underworld situated mere miles out of the town.  Suddenly beseiged, Sifnab became the battleground to one of the biggest invasions from the underworld.  Fortunately, Lorethane and Sicklesweet combined their forces to push back the invasion, and the entrance to the underworld was sealed up.  Constant patrols mann the area in case of another raid from the much hated Drow.

Sifnab is a small little town that can be used in any of your campaigns.  It can be a way station for an adventuring party, or even a base of operations for many adventures in the surrounding regions of the kingdom of Balstair.  Stay tuned for the next installment from the kingdom of Balstair.
Email ThisBlogThis!Share to TwitterShare to FacebookShare to Pinterest
Use This Setting: Sifnab
2011-05-09T17:10:00-04:00
Alton
Settings|
Newer Post Older Post Home
Subscribe to: Post Comments (Atom)