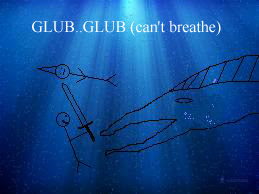 I love 4th Edition for the simplicity it has to offer.  The rules are easy to follow and learn, play time is simpler (you do not have to reference all the books with the online compendium handy), and roleplaying is encouraged and necessary to differentiate yourself from other characters.

The following post will cover the basics of an aquatic setting and give some tactics to use against some of these monsters.  Aquatic combat has so much untapped potential in the game; there is so little written about it.

Sure, adventurers can teleport to strange exotic places in a heartbeat, travel to different planes and even travel into the cosmos, without anything hampering their way.  Put them in a little bit of H20 and all hell breaks loose.
Most aquatic combat is assumed to take place on a shore, ship, or raft (like the Crystal Cave Session 7), where the party members are at little or no risk of drowning.  The information I would like to touch on today is related to the deep sea where creatures of impressive size throw you into the water, where adventurers have to fight there way out of encounters where the monsters have the home advantage.

Here are the rules that pertain to combat in the aquatic setting.

Here are some general rules that pertain to swimming: 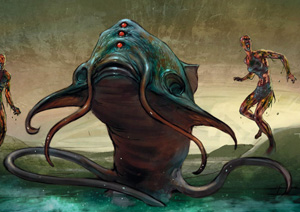 Deft Diver, Elemental Transmogrification, Primal Cascade are all example of powers that could be useful to the party for combats underwater.  Unfortunately, most characters would be hesitant to take any of these powers because of the frequency of aquatic settings.

Consumables and Items would probably be the better way to go.  You can always keep them on you and when in need...  Here are a few consumables of interest: Elixir of Water Breathing, Shoes of Water Walking, Pearl Sea Horse.  These items are relatively inexpensive, especially at higher levels.

The rituals that are useful are the following: Water Breathing, Waterborn, are probably two of the most important rituals to help you along your way.

I would probably attempt to flank the creature and box it in, in three dimensions to prevent it from having the advantage of moving around (swim speed advantage).  The other advantage to the boxing in effect is that the characters are spread out, so any blast effect only targets one or two PCs at a time.

Make sure that if you have a weapon from the spear or crossbow category, that you take it out so you are not penalized -2 to attacks, unless you have a power that functions underwater (see above).

Unless you have a swim speed, chances are you will have to move at half your speed.  A good tactic would be to provoke an opportunity attack to get into good positioning.  Sometimes you have to take one on the chin for the team to come out ahead.

Do you have any more tactics than the ones I bring to the table?  Have you ever fought combat underwater?  How did it go?
Email ThisBlogThis!Share to TwitterShare to FacebookShare to Pinterest
Tactics 101: Aquatic Combat
2012-01-30T09:08:00-05:00
Alton
Player Info|Tactics 101|
Newer Post Older Post Home
Subscribe to: Post Comments (Atom)