Surgical Instruments: How Lucky Our Adventurers Are to Not Have to Use Them During Medieval Times! 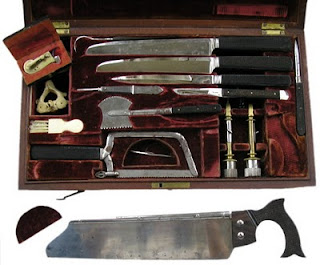 Spending the day in the hospital today for a minor medical procedure gave me time to think about odd ideas pertaining to the gaming world.  The one I would like to write about are surgical instruments and how lucky the adventurers are to not have to go under the knife in medieval times.

Imagine if Dungeons & Dragons had a critical medical table and a PC had to go under the knife.  How horrible does that sound?
Think about it; A sword slice from an orc across the leg can result in an amputation.  The character would have to be carried and transported to a clinic in the nearest town.  Not an easy feat if you are in the middle of a dungeons crawl, or some other location that is not readily escapable. Thank goodness for healing surges.

How many character sheets would you go through in a lifetime?  Would you walk out onto the battlefield and have to fight with crutches, or on a wheelchair (might be a good invention for the time).

Never have I seen dentists come up in our roleplaying campaigns.  Our characters take for granted that their teeth are tiptop.  Imagine how your characters would feel going into battle with sore teeth or a toothache.  Would you not incur some form of distraction penalty.  Thank goodness for healing surges. Hee hee!

Back in the days of the Civil War, during some of the bloodiest battles, most soldiers did die on the battlefield, but a high percentage died as well in the medical tents.  Soldiers were brought into the tent and emergency amputations were conducted with little or no anaesthesia.  Most times the soldier would be given a bit to chomp on and a given crapload of whiskey or some other alcohol to drink before someone took a handsaw to their leg, arm, foot, hand.  To boot, the wound was then cauterized with some for of heated metal to prevent the soldier from dying.  Most time though, the soldier would either die from the shock, or die from the infection that would spread due to the insane conditions in which these procedures were performed.

In medieval times, dentistry was crude as well as cruel.  Doctors pulled teeth out with pliers, and cavities meant the whole tooth was lost.  The tools were crude and cumbersome and I am sure that they caused a lot of pain.  Anaesthesia was also non-existant except for alcohol.

Your characters are lucky that they have clerics who could magically seal and heal your wounds.  Your characters are also lucky that they can spend healing surges to put themselves out of harms' way at the end of combat.
Email ThisBlogThis!Share to TwitterShare to FacebookShare to Pinterest
Surgical Instruments: How Lucky Our Adventurers Are to Not Have to Use Them During Medieval Times!
2011-04-06T22:52:00-04:00
Alton
How Lucky|Nonsense|
Newer Post Older Post Home
Subscribe to: Post Comments (Atom)