Defenders are the Best Role to Play! 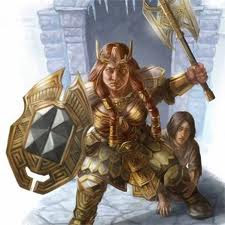 Do you enjoy jumping into the thick of battle? Do you enjoy being a masochist? Do you love to show and tell your battle scars while sitting around the hearth drinking with the rest of your party? Do you love the praise which comes at the end of the battle from the rest of your squishy party members?  Do you like the attention the monsters give you in battle? Do you like to kill things?  Then the defender is the best role to play.

Coming down to the final installment of the description of the roles, we showcase one of the most misunderstood roles in 4th edition Dungeons & Dragons.

Instigators, slayers and thinkers are supposedly the best motivations for playing a defender, for their ability to dish out and take punishment, slaying and brushing off big hit and being able to clog the battlefield with enemies that cannot move. I say any motivation can be used to play a defender in many creative ways. Who says a watcher cannot be the silent type fighter who does not care for parlay and is directed by one other party members in times of crisis. Defenders can easily turn the tides of battle by locking down foes with their mark, preventing allies from taking an undue amount of damage.  Defenders can also distract enemies, easily allowing the stikers to come in and gain clean hits. Defenders have many classes such as: the battlemind, the fighter, the paladin, the swordmage and the warden.

It takes a special person to play a defender; someone who has the guts to get into battle and hold the lines while the rest of the party completly obliterates the opposition.  They like it one-on-one or even eight-on-one.  The more the merrier. Defenders love to apply their marks on monsters, limiting their opportunities to take after another member of their party.  Defenders get upset if they do not gain another scar by the end of the battle.  Thems is bragging rights!

A defender can be of any alignment.  From lawful good to chaotic evil, from a knight in shining armour to a bloody mercenary for hire. Truth and justice, or destruction and chaos, a defender does it all. In any of these situations their is bound to be a defender.    Is he going to save that pesant?  Will he take down the tyrant? Will he kill the king just to get the throne himself?  Who knows?  But what we do know is that defenders are a force to be reckoned with and those that ignore them end up paying the price.

Each defender class has its strengths:
This is what the defenders would say to the other on the battlefield:

For the leader: 'Leave me be!! Tis but a flesh wound!'

For the controller: 'Take your time *yawn!* I can go all day.'

For the striker: 'Look at this gash!  What have you got to show for it tough guy?'

For all the oldies and newbies out there who play or want to play the game, the defender is the best role there is to play.  Who needs cumbersome robes, tiny daggers, bows and staffs?  The pumelling starts with the swing of my weapon and the strength of my armour.
Email ThisBlogThis!Share to TwitterShare to FacebookShare to Pinterest
Defenders are the Best Role to Play!
2011-03-21T19:02:00-04:00
Alton
Player Info|
Newer Post Older Post Home
Subscribe to: Post Comments (Atom)