D&D Encounters: The Elder Elemental Eye Session 2 - Across the River 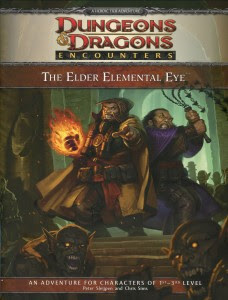 This week is session 2 and most of the stores should have played the second session of this season of D&D Encounters.  Here is the recap of week one:

Jakairn has been captured.  When questioned he tells the characters:
Not having had time to resolve the conflict of what to do with the villagers, the characters need to make a decision for the town leaders:
The characters now know the source of the plague and where to go stop it, they must now travel to the temple to defeat the cultist and shut down the temple.

A few hours south of the village, the character bump in to cultists sent to kill them.  They were to set up an ambush in Easting. The characters battle:
The battle concludes and the PCs receive the following for their efforts:
How did your party fare in this week's session: Across the River.  Did you change up the encounter?  Did your DM do anything different than was described here? (That's ok cause that is what we do!!!)