Review: Sword of the Gods, A Forgotten Realms Novel Demons, thieves, mad wizards, and a man with amnesia.  Sword of the Gods, A Forgotten Realms Novel, by Bruce Cordell is a novel that captures the imagination of the reader, springing us into the world of a man named Demascus.  Waking up naked on an altar in the middle of nowhere, surrounded by corpses dressed in red clothing, Demascus is confused.  He has no idea who, or where he is.  He defends himself from a demon, finds a map and some clothing and hits the trail.

Events lead to the city of Airspur where he meets haphazardly meets Chant Morvan, a pawn broker who just happens to be holding a scarf for Demascus.  No sooner than he gets his hands on this scarf that it is stolen by a thief.

Demascus knows if he has any chance whatsoever to regain his memories, he knows he must find his scarf.  He and Chant track the thief through the city, meeting interesting characters along the way.
Part of the Abyssal Plague series of novels, this book is a stand alone book set in  the world of Forgotten Realms. This is the first novel I have had the pleasure of reading from this author.  I have enjoyed his previous works as a designer for the RPGs of 3.5 Edition.  So I decided to pick up his novel and give it a try.  Here is what I though. 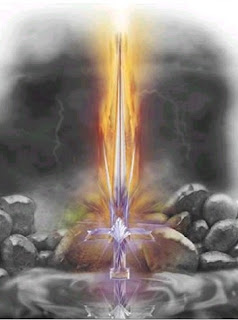 "As the novel begins, that’s the farthest thing from Demascus’s mind. He’s dealing with problems of his own, having awakened lying naked on a sacrificial altar surrounded by corpses and one not-quite dead demon. Worse, he’s slightly unclear how he came to find himself in such interesting straits.
Meanwhile, one of the Voidharrow fragments has finally managed to find itself a host. It’s causing trouble in the nation of Akanûl, a land south of the Sea of Fallen Stars. Calling itself Murmur, the fragment has the ability to infest the dreams of its host and tear nightmares from its victims to clothe in pseudo-living flesh. But Murmur is not without all compassion—it seeks to revitalize a sibling Voidharrow fragment that fell with it, one whose “dispersed” nature has scattered its consciousness. If Murmur can resuscitate its sibling (called Scour), the two Voidharrow demons will move on to their next project: whelming the Forgotten Realms with demonic excess as happened in their own home fossil continuum." from Design&Development

This novel is a definite must read.  I was skeptical to even start the novel because of the lack of feedback I received, the review I read and the "better" novels I thought were out there.  I would like to say that the book was improperly promoted and it is a shame, because this stand alone book does exactly what I said: it stands alone.  I would like to see the characters of Demascus and company continue to develop in future novels. It is a refreshing novel from the regular hack n' slash novels that are out there.