The DM Cannot Do Everything For You 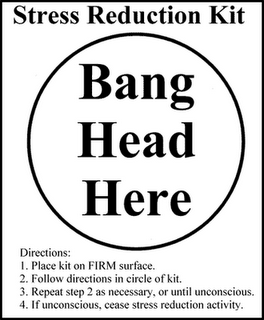 4th Edition D&D, especially Essentials, has made gaming more accessible to the general population.  No longer is it a game for the hardcore nerds and geeks. WotC has opened the possibility to everyone that just want to come in, take a seat, and just play. However, those that choose to just come in and play still must understand the basic rules of character creation and the general combat rules when playing their characters.

I am frustrated with the lack of initiative new gamers bring to the table.  I can understand if you are a brand new player, who is just trying the game for the first time and want to see what it is like.  I can understand that some people are exceptional learners and have trouble absorbing information from written works.  I can also understand that buying all the books is costly and can really put a dent in your budget, especially if you are a student at the elementary, secondary and post-secondary level.


What I do not understand are the people who come in, week after week, roll after roll, turn after turn, who still do not understand the basic concepts of the game?  I don't know what it is?  Are they lazy, or are we as the senior players and DM enabling these players by doing everything for them?  I mean, with the influx of all the new players, sometimes at a gaming table (especially during organized play), we want to play quickly and therefore suggest or even tell this new player what to do.

I have players at my table who still after 9 sessions, do not know what an attack of opportunity is. Some of them do not even know what their attack are and how to use them.  Standard, move, and minor actions are still foreign concept to them, even though week after week, we tell them what they can and cannot do.  I even have a reference area at my FLGS where players can access the books they may need or want to create their characters with.

Here are some possible problems and the solutions to the problems around the table.
Quit Enabling the Players!!

This is very important.  I see experience players, and even myself sometimes, pointing out things such as strategies, how to move, what attack to use, to the new player so we could get play going a little more quickly. The new player learns nothing from this.  If I have learned anything from my teaching teenagers is that they will not learn anything if they do not do it themselves.  So what can we do as experienced players?

How do we do this without offending or scaring the players away?  Think about how intimidating it could be: "Here, take this book and read it for next week.  If you don't then your character is going to die!!"  How would you feel?

What you can do is explain to the new player that in order for them to play their characters independantly and without impeding play, they must learn the basic rules of combat in the game.  The player should also learn their character.  Sit down and make a character with the player when you get a chance and show them that it is not that intimidating and fairly easy and straiforward to do.  Coach the player and start them off with characters and races from the Player's Handbook.  This way, everything the player needs come in the form of one book, and not the plethora of books that we experienced people are used to going through.  Remember, most of these new players will not initially have access to a DDI subscription until they have determined if they like the game or not.

If they later want to make another character once they get the hang of it - cool, it means they are willing to learn on their own and you should have no further trouble with the player. At this point the character can explore alternative resources for their enjoyment.

Get Players the Rules for Combat in a Nice Succinct Package

You could also just photocopy the combat section of the book and give it to them.  This way it is not as intimidating as picking up a 300 page book and have to read it all at once.  In this case they would have the section(s) that are important for every week and this would be an option that is affordable to them.(I would get them to reimburse me depending on the number of new players present).  Photocopying certain sections and placing them on the game table during gameplay could also enhance their experience around the table.  Not everyone would be fighting for that single copy of the Players Handbook. Short and Sweet!

We live in an era where things are handed to us on a silver platter.  I don't say this as being negative, just a simple fact in this day and age.  Look at games like World of Warcraft, Skyrim and other MMOs. Instant gratification with minimum involvement.  Now that Dungeons & Dragons have come out with a system that is less involved and extremely user-friendly(compared to previous editions anyways), these people can come in and have a character available to them.  They also get the benefit of coaching from senior players at the table(see enabling player above).  They do not need to do anything to come in and play.

Rules can be brushed aside, and moves can be made on a whim(because someone will tell them not do do certain things).  Players have to learn on their own.  Some will take to the game and become future gamers themselves, where others will come in and play casually and make no effort to learn - they just want to roll the dice and kill stuff!

Laziness something I have trouble tolerating at the table.  If people do not want to learn, then I try to weed them out, I try to push them away.  I know you are all saying: "but Alton, it is a game that everyone should be able to play no matter the person!"  I agree with this statement somewhat, but to please the non-learner and make the rest of the "crew" unhappy and miserable is unacceptable to me.

I know that we are supposed to be tolerant of all players who want to play the game we love, but sometimes enough is enough.  I, like most people, do give the second, third and even fourth chance to these players, but when all avenues to help this person have panned out, there is nothing more we can do but cut them loose and return them to their X-boxes and Playstations.

I learned the game on my own and with the help of players and my own initiative. I quickly became a good player.  To get good at anything, we must try, study, and learn to do what we love.  I encourage everyone to come out and try the game, but for me or my players to play 4 characters per session....It is too much.

Have you had any situation similar to the above at your gaming table?  Do you feel the same as I do sometimes?  Do you think I am too harsh?  What kind of solutions can you bring to deal with situations such as this?