Strikers are the Best Role to Play! 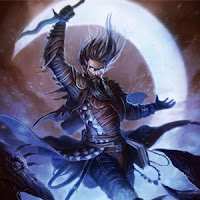 Wouldn't you want to be able to run a round a battlefield, dishing out massive damage and running away without the monster even knowing that you were around?  Wouldn't you want to have the highest kill ratio in the party?  Do you like the idea of being able to navigate around a strange city, talking your way out of situations that no other role could?  Or how about peeping out from hiding and zapping monsters from afar?Then strikers are the best role to play!


I know the player strategy guide mentions the type of motivations associated with particular roles, but anyone that would like to do the above is more than welcome to play a striker.  The striker role has the largest group of classes than all the roles out there.  You have the assassin, the avenger, the barbarian, the monk, the ranger, the rogue, the sorcerer and the warlock.

It takes a special player to properly play a striker, someone who has a good overview of tactical skills on the battlefield and a zest for dishonourable combat.  If you don't have the guts, or do not want the glory, do not play a striker.

As a striker your alignment should never be lawful good; you are too self-centered to be interested in the well being of those who are not dear to you.  This is to your advantage, since caring prevents you from doing your job properly.  Your wily ways take you from one side of the combat encounter location to the other.  You don't care about plans on the battlefield, all you care for is to take down the enemies who get in your way.  Your allies are meat shields that you use to distract the enemy for the inevitable strike that will take them down in one slice.  No one is safe around a striker.  Not even your party member.

Each striker class has its strengths:


This is what a striker would say about the other roles out there.

For the defender:  'Hi! I would like to introduce you to my meat-shield.'

For the leader:  'Stand in front of this guy and heal me!'

For the Controller:  'Who said I need a controller? They just move prime targets out of the way.'

For all the oldies and the newbies out there who want to play the game, don't you forget that the striker is the best role out there to play.  Who needs to carry cumbersome armour, large shields and big weapons?  Who wants to move enemies around the battlefield? My dagger and my magic will do just fine.
Email ThisBlogThis!Share to TwitterShare to FacebookShare to Pinterest
Strikers are the Best Role to Play!
2011-02-11T16:37:00-05:00
Alton
Player Info|
Newer Post Older Post Home
Subscribe to: Post Comments (Atom)