March of the Phantom Brigade: Session 1 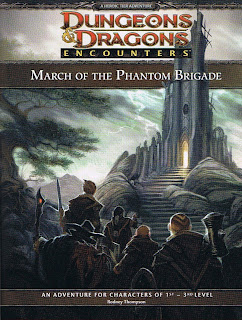 This was the first week of 13 of the new season of Dungeons & Dragons Encounters: March of the Phanotm Brigade.  It was quite an exciting week; I was stoke to DM it and the players seemed to be stoked to play it.  We had a table of five this week; Jarren the Human Wizard, Belgos the Drow Ranger, Brandis the Human Paladin, Valenae the Eladrin Cleric, and Fargrim the Dwarf fighter.  The only pregenerated character we were missing from our ranks was Keira the Elven Rogue.  Even with the lack of a Striker the party handled themselves with grace...well something like that.

All of the players ranged from experienced to fairly new but all have played D&D Encounters. I don't have access to Twitter from my playing location so I had no idea of what the buff was this week.  I decided that this week was going to be a roleplay week and decided against the use of the Fortune Cards at my table.  I will introduce them for the next session.

I also told my players that information this season is given to those who are inventive and who attempt to roleplay throughout the adventure.  The prompting and prodding yielded great results in the first session.  The players handled it wonderfully, from a Lawful Good Paladin, to a teetering drunkeness of the Dwarf Fighter.

The adventure begins with the heroes as part of a caravan of pilgrims setting out to found a town in the ruins of Castle Inverness.  The heroes are 1st-level adventurers who have been hired to help insure that the caravan reaches safely.
The setting begins in the necropolis of Hammerfast, one of the largest settlements of the Nentir Vale.  The characters were prompted by the following information:

You and your companions stand huddled in the chill of early morning, blowing clouds of mist with every breath.  Dawn is just breaking and the shadowed walls of Hammerfast loom above you.  A caravan of settlers is preparing to depart, and you are among them.
Some months ago, a call went out from the in Hammerfast seeking able-bodied settlers to establish a new town to the southwest.  Desiring to settle in the new town, you answered the call and now stand in a field outside of the town awaiting the caravan's departure.

I thought this was a great opening, (finally no bar or tavern involved).  I asked the players to introduce themselves and one player played it up nicely.  Fargrim portrayed himself as a drunken dwarf, always looking for the next drink.  He said he was neutral and played up the fact that he was going to get rich, settling in , and never have to run out of money for his ale.  I thought this was funny.  He kept it up for the whole session.

Character who asked what they were getting out of guarding the caravan, were told that upon securing and settling Inverness, each character would get a small stipend to build a home, courtesy of Brother Splintershield.

The caravan leaves Hammerfast and along the way, a dwarf in the robes of a cleric of Moradin named Aldus Splintershield walks by the characters, and in a cheery voice, welcomes them and thanks them in advance for their willingness to help settle and protect the caravan along the way.  Our players learn from Borther Splintershiel that the reason for the new settlement is to serve as a waypoint between Harkenwood and Hammerfast. The rangers that were accompanying the caravan take their leave to return to their functions and the rest of the day and evening are uneventful.

The next day the adventurers are startled by shouting at the front of the caravan.  Brandishing their weapons and preparing spells, the characters are met with Brother Splintershield, and the caravan leader, Malgram the half-orc ranger.  They are shouting at each other, trying to decide which way to proceed, since the trail ahead is washed out.  Brother Splintershield wishes to attempt a crossing nearer the mountains and Malgrim says they will be safer along the forest edge.  One of the player characters stated that if they wanted to get to by tomorrow, they ought to decide fast.  He noticed seven people total and suggested that both, Malgram, and Brother Splintershield as well as the characters decide on a course of action by vote of majority.  After everyone voted, the tally was 5 for the forest, and 2 for the mountains.

On the third day of travel, the caravan reaches a spot in the river that would be navigable by the horses and the wagons.  Brother Splintershield and Malgram would accompany the first half of the caravan, and the party would cross the other half.

The first crossing goes off without a hitch, but as the second half attempts to cross the party fails to spot the incoming Stirges.

Two of the five Stirges arrive first, impaling themselves on the first targets they see; the horses.  The horses and caravaners panic.  Belgos yells to the rest of the party, that the wagons have to cross before they are lost to the current.  He puts his back into the adjacent wagon and with the help of the adjacent caravaneer manages to push the wagon across.  The panicked horse manages to kick off his assailant and the Stirge is knocked prone.  Fargrim yells to his horse to shove off and slap it in the rump.  The horse is so surprised that it manages to drag its own cumbersome load across the river to safety.  Jerren attempts to aid Valenae with her wagon, but are unable to entice the horse to move.  Brandis' wagon is pretty stuck and no matter how hard he pushes it just won't move.

The rest of the Stirges move in for thier meals.  The party is attacked and Jerren is impaled by the Stirge.  The other two move to Fargrim and one manages to attack itself to the back of his neck. The other misses as Fargrim staggers from the effects of the alcohol in his system.

The prone Stirge lunges at Brandis, narrowly missing.  The horse winnies loudly while the Stirge on his back starts sucking the life out of the horse.  Belgos moves to help Brandis with the wagon and together manage to finish the crossing.  Fargrim grunts in pain as his enemy start stealing his lifeblood away.  He manages to break the hold and bloody it with one fell swoop.  Jerren is tired of pushing the wagon, so fires his Magic Missiles at the foot of the horse, intimidating it enough to move.  The horse manages to kick off its assailant and the Stirge is knocked prone. Now that the horses were safe it was time to kick some butt.

Jerren, and Valenae, caught off guard, are both impaled by a Stirge. Fargrim makes quick work of his Stirge and manages to avoid the other one attacking him, again stumbling all over in his stupor.  Brandis and Belgos attempt to help their comerades and manage to damage both Stirges.  Taking the damage from the Stirges, Valenae qucikly breaks the grapple and heals her wounds, launches herself into the fray, dispatching her adversary with one hit.

Jerren cannot shake his adversary and attempts to magic missile it.  It falls dead at its feet.  He then spends an action point to freeze the remaining two Stirges; they fall to the ground and shatter.  The party is victorious.

I found this encounter to be very interesting.  I really love the new terrain powers they added to the module.  You do not feel as helpless and can actually accomplish something by saving horses and people alike.  The party managed to save all four horses and only two out of the four caravaneers, which means bonus XP for the party.  This incentive is great for the players and they seemed to enjoy all that much more.  The whole session last about one and a half hours and ran very quickly and efficiently.

All in all a great experience and can't wait to see what my players will do next week.
Email ThisBlogThis!Share to TwitterShare to FacebookShare to Pinterest
March of the Phantom Brigade: Session 1
2011-02-10T14:27:00-05:00
Alton
DandD Encounters|
Newer Post Older Post Home
Subscribe to: Post Comments (Atom)