Last week the party was busy.  Interacting with the people from Peldan's Helm, the party managed to track down the Zhents and happen to stumble upon a group searching for the Diamond Dtaff themselves.

The characters then follow the chimes and eventually end up at the ruins.  Only a few building remain, the rest having been obliterated. The first room is Chomylla's monument, a statue that was erected by Chomylla herself after the destruction of the beautiful city.  Touching the statue imparts a message to the  players of the horrors that befell this city and the cities surrounding the area.

The characters can then move further into the ruins and can pass through the moon arch, a white marble wall whose top is carved in the shape of a crescent moon.  Webbing has been strung across and any player who passes through the arch can set of a tripwire trap that shoots poisoned darts at the party.

Surviving this the party bump into a body strung up on webs...a Zhent soldier.  After investigation, they find some cool stuff on the dude.

They then stumble upon the lair of the Chitines. 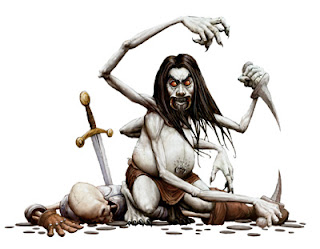 These pale folk with four spindly arms are up on the webs and attack the party as soon as they move into the lair.  What happens next is up to your table.

This weeks podcast is a little long, we had a lot to talk about.  Stick with it to the end because we talk about how to modify the encounters, throwing ideas out there for way to overcome the "extended rest" the party is supposed to take.

Follow us where we once again talk about the good, the bad, and the ugly of this season of D&D Encounters: Search for the Diamond Staff