Recounting Encounters - Storm over Neverwinter - Session 3: City of the Insane 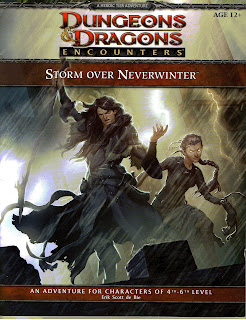 Join us for another great season of the good the bad and the ugly as Derek from dungeonsmaster.com, Craig and I recap everything that happened at our gaming table this week.  We talk about what happened during the encounter, some of the changes that we made as DM's and talk about some of things we liked a lot and things we liked not so much.
Session 3 - City of the Insane

This week in my opinion continues where session 2 ended.  You have rescued Lady Nidris's son Zan and have returned him to her.  She then tells the party that there will be a reward for an answer to the kidnappings.  She says if the party can put a stop to it they will receive much gold.  The party can then return to the Ashmadai hangout and start from there.

The party has the option to explore the docks area or to get some information from the Beached Leviathan, a converted beached ship.  the party speaks to the captain of the guard Muln Horan, and as soon as he is finished speaking, a few devils and some dominated folks attack the party with Horan being one of the casualties.

the session ends with some of the soldiers of Neverwinter approaching the party and telling them that many, many people are going mad.

Here is the combat map of the Beached Leviathan.  Very cool that they have the two levels mapped out.