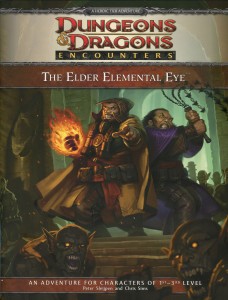 Session 6 begins after the defeat of Azryg and the cultists in the main chamber of the temple.

Here is the session 5 recap:

-The characters found the temple entrance and fought its elemental guardians, and explored some of the temple interior.

-Adventurers might have interacted with captured cultists and/or Malgrym, a prisoner in the temple. From such sources, they might have learned about the Great Shrine and its guardian (a "blue ooze"), the Black Cyst, and the source of the abyssal plague. Ask if the players know anything extra about the temple, and assume the party knows what the players know.
Once the characters have defeated Azryg and his mad cultists, they continue to explore the shrine.  They continue to explore the remainder of the Sunset Shrine.  In the previous session, the characters were able to explore areas 1-5.  The map below shows the remainder of the areas 6-15. 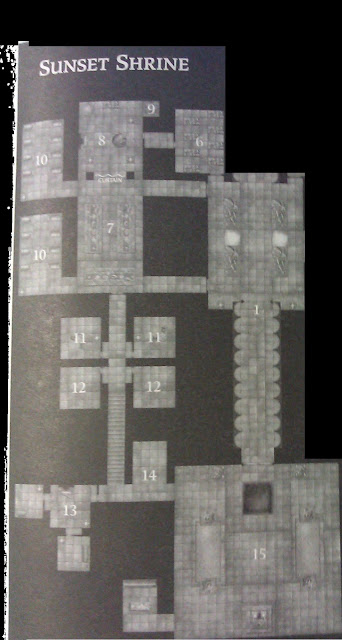 The Keys you may have found on Azryg opens the door to this room. This gives the characters the impression that the dwarves are well stocked and planning to stay for awhile.

Nothing of value in this room. Smells of rot and mold.

There is well water here, clean and fresh. There is cold meaty stew in the pot.  Nothing much of interest in this room.

This is a refuse pit for all the junk from the cooking leftovers.  It is 20 ft deep and full of slime. Characters have a 1 in 6 chance of falling into the pit.  No damage, just some serious slime.

Eight bunks line the walls; each with a chest at the end of it.  Searching the room reveals coins and  and ivory smoking pipe worth 15gp per character.

Nothing much of interest, except for a deck of marked cards (Perception DC20).

The earthen depression in the ground are the beds for the norkers.  Searching the area reveals 5gp of miscellaneous stuff per character.

The keys from Azryg will open the door to this room.  So will a Strength DC20, or Thievery checks DC13.

Search of this room reveals10gp per character and one random magic item.

This room is empty but a perception check will let the characters hear the scraping of boots in the next room.

Unless the characters move stealthily through the vestry the guardians in this room are ready for the party.  The following creature are present for this encounter:

Features of note for this encounter:

- the Altar in this room is very cold.  Any character starting their turn adjacent to the altar takes 5 cold damage.

Each character receives 275XP and 30gp per character worth in coins.