Review: The Cloud Roads, Volume One of the Books of the Raksura 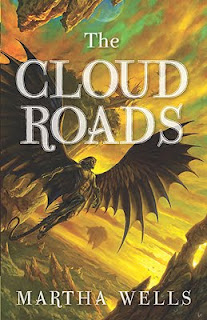 Moon is a shapeshifter, a man lost, without people, without identity.  He has spent his whole life hiding his true form, a creature of flight.  Orphaned at a young age, Moon does not know his purpose.  His whole life he has craved companionship and acceptance, trying to live among the 'groundlings' until they discover what he is and throw him out of the tribe.

Staked to the ground to die, Moon is rescued by Stone, another shapeshifter just like him and together they set off to a distant place where there are many of his kin.  Curious and frightened at the same time, Stone and Moon make their way back to Stone's home, Indigo Court, where he meets opposition at every turn.

Moon soon finds out that his extraordinary lineage is crucial for the colony's survival, survival that will be challenged by the world's nemesis called the Fell.

Moon is faced with a tough decision, flee the terror that approaches, or fight a lifetime of conditioning in order to save himself and his newfound kin.
The Cloud Roads is the first installment of the Books of Raksura series.  The second book "The Serpent Sea" is currently on the bookshelves since January 2012. Sources state that she is currently working on the third installment - details to follow.

The Cloud Roads was a great novel, an easy novel to read.  I was absorbed after the first couple of chapters(the start is a little slow and useless), but the remainder of the novel was engaging and entertaining.  Due to the prevalent nature of good versus evil, it is not hard to want the main character to find all the happiness that is due to him.  He is a distant character, but well meaning.  The world has so much potential, that developing this world for the Dungeons & Dragons would be such a rewarding pursuit, cause it is just that cool.