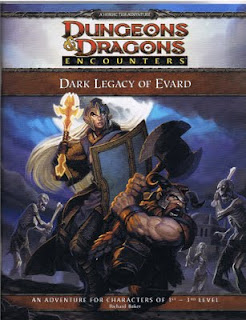 I just received my copy of this season of Encounters and I must say it looks pretty good.  I made a comment over at Dungeon's Master that I do not think this season is going to top last season.  I still hold true to that thought, but after reading the adventure, I think it is going to come darned close to the quality of D&D Encounters Season 4: March of the Phantom Brigade.  We will see at the end of the season.

My FLGS is always kind enough tho give me a shout when I get my items in the mail.  I received a large box and thought: "What the heck have they put in here for the season?"  Cracking the box open, I see that most of the "Bigness" is filler, and the cool stuff is at the bottom of the pack.


The items in the box were the following: the adventure and maps, tokens, pre-generated characters, initiative cards, renown cards, fold up boxes,  and nick-knacks for the table. 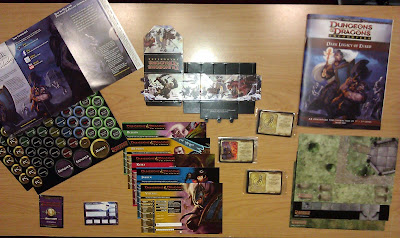 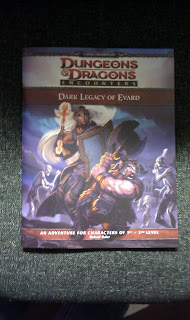 The adventure booklet is well put together this time.  For the last 4 seasons, the cover came off the rest of the adventure.  This time it is a static cover and does not come away.

Opening the booklet, we see the fantastic organization of the last adventure.  I am quite impressed that there is a map of the whole town as well as the main areas of interest that the adventurers are going to visit.

The NPC's are again well thought out and the descriptions are clear and concise with roles, goals and holes for the DM to exploit.  Many of these NPCs are given a fleshed-out appearance.  At the end of this season, the town of Duponde can be used as a base of operations for future adventures.

I am once again impressed by the quality of the maps that are included for this season.  Every season sees an overall improvement of the quality and detail of the maps.  I tend to get all my maps laminated so I don't have to work all the kinks out of them every week.  This prevents damage of the maps in the season and makes them reusable in the future.  The good thing about laminating them is that you can use non-permanent markers to add details as you see fit for this or any other campaign you have in mind.

The tokens are pretty standard and back to the flimsy versions of them.  However, I don't mind them so much now because WotC gives them out for every season and these "cheaper" versions allow them to save a little coin to make these adventures as awesome as possible.  I would take cheap tokens any day if the adventures keep getting better over the long run. 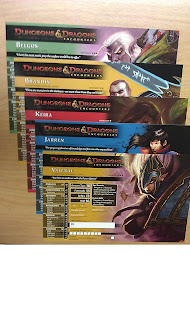 I opened the box and looked at the pregens and wondered to myself - this is weird, they are the same characters as last season.  I thought it a little odd but then I took a moment to think.  It makes sense.  Pregens are only used by the new players coming into the game for the first time.  Passed the first couple of times, or if you spend any amount of time playing encounters, the player tends to want to create their own characters.

Smart.  Once again, they save a little money for some better stuff.  Now they are thinking with their kidneys.  The only problem left to solve is the leveling up of the characters throughout the sessions.  I guess it will be up to the organizer to level the characters before the next session of play if necessary.

I did find this group of characters enjoyable to play, and my group around the table also found them enjoyable.  I think I may put a couple of the old characters out on the table from previous session of encounters to see if it sparks any added interest, but as of right now will keep as is.


Initiative Cards, Renown Fortune Cards, Fold Up Boxes,  and Other Nick-Knacks for the Table. 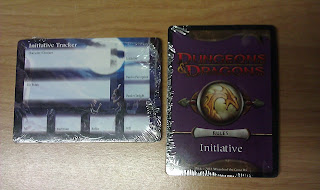 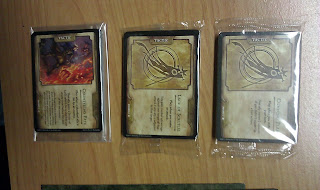 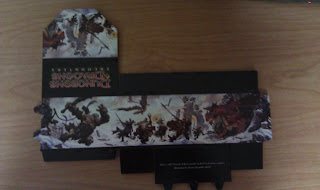 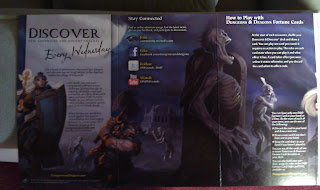 The initiative cards are...well a good initiative the time round.  I will try these and hopefully give some positive feedback on how well they work at our table.

The renown points cards are pretty cool.  Just click on the photos to read then.  Pretty run of the mill, but one more season of Encounters for a regular player and they will have a whole deck of fortune cards at their disposal.

Another cool thing this season are the fortune card boxes.  These items to hand out to players, folds into handy little carrying cases for a players cards.  They are kind of hard to put together, but overall a cool little gift to hand out to regular players or maybe to retain some players with cool stuff that is being given out.  Still pretty thoughtful of them to give these to us.

Other nick-knacks are the "standers" for the tables, a dice mat insert and the regular poster of this season's adventure cover.