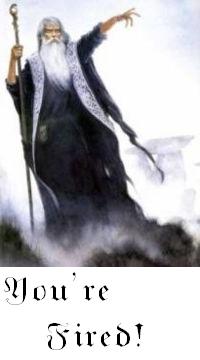 Ever wondered what people do in Dungeons & Dragons to unwind after a long weekend of dungeon crawling.  Well ask no more!  Welcome to "The Apprentice", starring Fistandantilus as the head wizard.  Come to the High Tower of Palanthas where apprentices from all over the planes would be competing for a glorious position of studying under the Master Wizard.

I was reading the recent post from Dungeon's Master about social encounters and thought a little longer about it and came up with a new idea for those nights where you are missing a player or three. Instead of cancelling your evening for lack of players, you can use this idea to design an evening of skill challenges for your characters that are present. I will describe possible ways to have fun roleplaying this idea into your campaign.

I have chosent to showcase wizards in this case, but any class or combinations of class can be used to showcase a specific event such as this one.

Contestants from all over would love to covet a position with the master(In this case, Fistandantilus).  They simply have to survive till the end and be the last one not fired.  The contestants will be given a series of challenges and they have to accomplish the tasks to the best of their abilities.  Each episode will showcase the use of different skills to test the mettle of all the characters, to make sure they are well rounded.

All in all there would be 10 contestants, who will put themselves at great risk. (you can enter your character here if you want).
These contestants will be put through a series of tasks throughout the season.  These task could possibly involve group work or individual work.

Episode One:  Anticipating Alchemist Fire
Creating the alchemist fire. (Let's use a 5th level encounter for example)
The characters have one week to create a batch of alchemist fire.

Arcana (DC 17): two checks are needed to be able to gather all the ingredients.  Any further checks result in a +2 bonus to the next check they make in THIS skill challenge. The individual DC's determine if they find the item in question. Failure in this skill gives the character a wrong ingredient.

Nature (DC 17, must have rolled an arcana check already): minimum 2 checks are needed to be able to locate and acquire this product in nature.

Perception (DC 15):  the character can roll to see what the other contestants are doing and what ingredients they are procuring if they are stuck in a rut.  If the character succeeds, the get a +5 bonus to the next Arcana check they make.  Failure in this check results in the character mistaking a certain component.

Insight (DC13, can only be used suring the fabrication once all the elements have been gathered): The character can use this skill during fabrication of the alchemist fire, to make sure they are adding the correct amount of ingredients.  Success in this check results in a +2 bonus to the next arcana check during creation of the potion. Failure results in the addition of too much of some of the ingrediants during the creation.

Success:  If the character failed one arcana check, but succeeded in the skill challenge, the character realizes they procured one wrong ingredient and substitutes it for the correct one. The character creates a viable alchemist fire doing 1d10 points of fire damage initially, and for two round thereafter, 1d4 fire damage per round.

Failure:  The character has created something different.  See below (the next challenge) for the results.

Final product
At this point, all the character gather in the town center and are to present the creation to Fistandantilus, who at this point will choose who will be FIRED! The character each take their turns launching a pouch of alchemist fire on a pile of logs.  A character who is successful automatically gains Fistandantilus' favour.

If the characters failed the previous part of the skill challenge, here is a chart that determines what the character has created.  Roll d6 and choose from the table.

1- Tasty hot sauce:  The character did not add enough ingredients to the mixture for it to become combustible enough
2- Extinguisher bomb: A crazy gag item that, once thrown on someone, it will explode into flames but before causing any damage, will extinguish itself. (too much water)
3- Firewater: an alcohol of some type. Needs a flame to catch fire.
4- Summon Fire Newt: once the bag is exposed to air, a fire newt forms on the spot and attacks the creator of the bag in question.  The newt automatically hits dealing 10 damage and then disappears into thin air.
5- Lava goop: Once exposed to air, the goop turns to lava, which turns to stone before it hits its mark.
6- Roll twice(only do this once):  The mixture has separated and is now in two forms.

Please note:  If the PC succeeds either of the skill challenges, randomly choose 2 characters from the above list to be fired. If the PC fails both, He is fired and cannot continue.