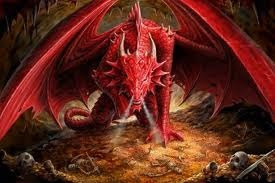 I love 4th Edition for the simplicity it has to offer.  The rules are easy to follow and learn, play time is simpler (you do not have to reference all the books with the online compendium handy), and roleplaying is encouraged and necessary to differentiate yourself from other characters.

There is one thing that bothers me and continues to bother me about 4th edition.  Flying creatures!  I personally find them annoying in combat situations. There are no real tactics to deal with them.  For example, your party will normally be faced with land bound creatures such as orcs, gnolls, kobolds, and within a few rounds your party can eliminate the opposition one by one.

However, you add a flying creature into the fray and all tactics of focusing fire are gone to hell and combat continues endlessly between ranged strikers and controllers (mostly).
The other irk is the lack of flying potential in any of the class powers.  For example, powers such as Swift Flight, King's Step,and Cloak of Shadow, are just examples of how useless these powers are for aerial combat.  Now don't get me wrong, there are plenty of powers that can be used to possibly take down flying creatures, but the probablitlity of having many party members with these abilities is limited.

In my opinion, aerial combat excludes 2 important roles in combat encounters.  The defenders and the leaders.  Most defenders and leaders tend to be melee combatants, who face enemies one on one on the battlefield.  When flying creatures are involved, their roles are essentially useless...or are they.

This article will touch on some of the tactics I think are useful to deal with flying enemies and including the defenders and leaders in achieving some measure of participation in combats such as these. 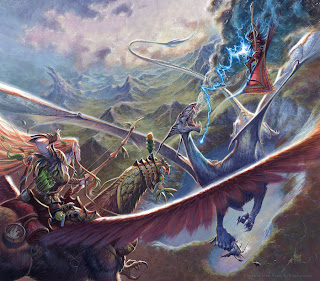 Lets set the stage.  The 3rd level party enters a large chamber and find the lair of the Young Green Dragon.   The chamber is large enough for the dragon to fly.

If the DM plays the monster as they should, aerial combat becomes very difficult for those PCs who have melee reach only.

If moving around the battlefield is good tactical sense to a striker, then it is probably good for everyone. Make sure the party is spread out.  The Defender and the Controller should move together to prevent the rest of the party from being caught in a breath weapon.  This greatly reduces the effect the dragon will have on damage to the party.   This way the dragon has to attack one of the groups therefore only dishing out damage onto one of group and not everyone at once.  Damage to everyone at once can be a devastating way to begin the encounter.

Most Strikers rely on dexterity to attack with their weapons: so...Strikers - sheathe that sword and take out a ranged weapon to be able to attack the creature from afar.

Most players are not used to searching for terrain to use as cover in situations such as these.  Most times it is go in destroy and leave.  USE terrain to your advantage!  Any kind of cover or concealment gives any character a +2 to all defenses against burst or blast effects.

Retreating to another location is a great way to bring a flying creature to the ground.  Move the whole party (staying a certain distance from each other the whole time) from the area in question to lure the flying creature into the smaller area (such as a hallway or an eclosed space) in order to limit its movement.  This way the creature is forced to land to engage the party.  Once the creature is grounded, try to pin it down with powers that knock creatures prone and get a mark on it.

Timing is Everything
Make sure that party members use the delay and ready actions to coordinate attacks.  For example, the 3rd level Ranger power Upending Throw allows him to use a ranged weapon to knock a creature prone, therefore knocking the creature out of the air right into the lap of the Defender.  Not only does the creature possibly take damage from the fall but the Defender can mark the creature preventing some movement and keeping the creature grounded.

Although going first in the combat round is always cool, a Striker rushing into a one on one situation with a dragon is a diasater waiting to happen.  Use ranged weapons if you want to absolutely strike first, or delay or ready your action to move after the heftier characters have gone, or, if you win first in initiative, move to a place that could give you good tactical advantage over the battlefield.

Although there are powers that allow players to summon fighting creature for them, they are likely character classes such as Wizards and Druids.  Psions and Invokers have the power but to a limited degree. Most of these summoning powers do not begin until level 5.  The moral of the story here is that the party should strive to keep the characters that can fight ranged as safe as possible, and to fight together to maximize your chances of felling flying creatures.

Fighting flying creatures without a mount or the ability to fly yourselves, always creates interesting battlefield dynamics.  I know that I had a hard time coming up with sound tactics to be able to fight them, but after extensive use of these tactics, our party has been able to handle flying creatures quite effectively.  It takes the collective thinking of the group to overcome challenges such as these, but with trial and error, will find a way with your party to seriously be able to tackle combat with a flying creature.

Do you agree that flying creatures are irky to fight?  Have you ever played a character that did not fight most of the combat due to being melee only? Drop us a line and tell us your stories?
Email ThisBlogThis!Share to TwitterShare to FacebookShare to Pinterest
Tactics 101: Flying Creatures
2011-03-28T14:33:00-04:00
Alton
Player Info|Tactics 101|
Newer Post Older Post Home
Subscribe to: Post Comments (Atom)