Rrrrolling up the Dice on Interaction Skills! 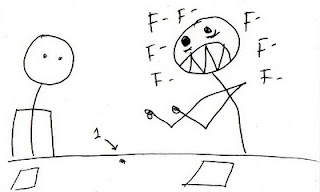 Jester: 'I am going to try to bluff the monarch that the task presented to us is much too difficult for the amount of gold he is offering us.  I want him to give us more!'

Jester:  I got a total of 29. THAT SHOULD GET ME SOMETHING.

DM:  (rolling insight of 30).  The monarch sees what you are doing and does not appreciate you trying to take advantage of his generosity.

DM: I just told you you failed.

Jester:  That sucks!  What a waste of a good roll!

Jester: 'I am going to try to bluff the monarch that the task presented to us is much too difficult for the amount of gold he is offering us.  I want him to give us more!'

DM:  Ok!  One sec..(rolls Jester's bluff check 20 vs monarch insight 21).  Unfortunately, the monarch sees what you are doing and does not appreciate you trying to take advantage of his generosity.

Jester: Shucks!  Allright, I apologize to the monarch and we will take his mission.


These are scenarios that can happen at any table while playing an RPG.  Players love to roll dice, but should they roll all their checks themselves, or should some of them remain hidden in order to flavour the game with the unknown.  This debate between players rolling all their checks versus DMs rolling some of the checks have bee ongoing in specifically editions 3 and up.  I will go over the skills in 4th Edition I think would fall into the category of DM versus player rolling and will then give the pros and then the cons of each method of gaming.

During the course of an aventure, characters will meet many people, overcome many obstacle and even slay many monsters.  There are quite a few interaction checks that players have at their disposal.  These checks come into play while talking with NPCs.  The rogue can try to con his way into the castle with a bluff check, the paladin can try to bring the king to see his point of view with diplomacy.  All these checks should have a chance at success or failure.  In the DMG there is a DC for everything that players are trying to accomplish.  I will list what I call the public interactions skills:
There are also skills that interact with the environment:
Now all these skills could be used by the player or they could be rolled by the DM.  There are the pros and the cons of both.

Players love to roll dice, but these interaction skills should require some form of surprise element to it.  DMs should write down each players skills and when the time comes, roll the appropriate skills.  The advantage to doing this prevents players from arguing about what should be acceptable or not regarding DCs.  This in turn prevents stoppage of play, and does provide many better opportunities to roleplay based on the hidden results.

These skills should be skills that are randomly determined.  Should the player know what he/she got on their skills?  Is it much better if a player knows what they rolled on their end, or is it better for the DM the propogate the intrigue or the suspense with talks with the Barony.

Let's say the Baron is known for his devious nature and he is a very secretive person.  Let's say the rogue is asked to go on a mission for the Baron and tries to bluff the Baron to give him some mercenary scouts stating it is: 'because he does not think he could handle this much spying by himself', meanwhile the rogue is only going to use them for fodder if he gets caught. If the rogues bluff check is worse than the Barons, the Baron knows he is bluffing, he may counter the rogue by sending the mercenaries with him only to ambush the rogue later on the mission.

Would it be better to have said: 'hey rogue, the baron doesn't beat your bluff check, so he lets you take the mercenaries'? Or would it be better to say: 'The Baron look thoughtfully at you and after a minute, assigns six of his best men to accompany you on your mission.'? This way the rogue will have a couple of things to worry about: Does the Baron think I am lying? Do I have to watch my back?

On the con side, I have to admit, I love rolling my own dice.  Players love to roll their own dice.  You have players from all creeds.  Some that rollplay, some that roleplay, some that metagame, some that don't.  You also have those that cheat.  Cheaters in particular love to get away with murder in this type of situation.  They lift the die before anyone can look at it showing a number that was not on the die.

Another con is the workload for the DM.  Unless you have a form of system that allows you access quickly to the player skills, there will be a lot more work involved for you.  It is up to the DM to also roleplay these situations, even more so than you normally do.

Interaction skills are very important to the mechanics of the new game of 4th Edition.  Your table determines how the cookie crumbles.  You should talk with your players ahead of time and establish the system you want to play at the table.  You can even determine more or less skills, based on what your party wants

Do you have a system where your DM rolls your interaction skills for you to better roleplay?  Do your players roll their own dice at the table?  Tell us what you think of this system.
Email ThisBlogThis!Share to TwitterShare to FacebookShare to Pinterest
Rrrrolling up the Dice on Interaction Skills!
2011-03-08T14:33:00-05:00
Alton
DM Info|Player Info|
Newer Post Older Post Home
Subscribe to: Post Comments (Atom)