Controllers are the Best Role to Play! 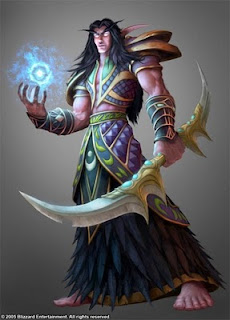 Wouldn't you want to be able to stay back from the fight, damaging multiple enemies at a time?  Doesn't pushing enemies around the battlefield, preventing them from executing a battle plan sound good? Or how about changing into a fearsome animal, being able to stop many enemies in their tracks with your powers,imposing ridiculous penalties?  Are you smart enough to stay out of the battle and be able to help your comrades bring enemies down before their time using tactical wile?  Then controllers are the best role to play!

Thinkers supposedly make the best controller, using their tactical prowess on the battlefield.  Even though this may be true, any motivation can play a good controller.  Who says a slayer cannot be someone who likes to damage multiple foes?  Controllers can easily turn the tide of the battle, moving enemies around like rag dolls. There are not many classes in the controller.  The druid, the invoker, the psion, the seeker, and the wizard are forces to be reckoned with.

It takes a special person to play controllers, someone who has a good long term plan to claim victory at the end of the day.  The controller loves to apply limiting condition on monsters, preventing them from carrying out their actions. The controllers love to move enemies into advantageous position for their allies. Their favourite thing to do is to kill minions.  Controllers can eliminate multiple minions with only one blast or burst effect.

Alignment has no effect on the role of a controller on the battle field.  The can be from any background.  Do you have a penchant for vengeance? Do you want to help those who are less fortunate than yourself?  Are you a controller for the sheer power you can acquire?  Do you just hate the whole world in general and want to make ever race pay for their inferiority?  The only limit you have regarding alignment is the party you travel with; most parties will not accept alignments very different to the group's.

Each controller class has its strengths:


This is what a controller would say to the other roles out there:
For the defender: 'You're taking too long with those minions!  Watch this!'
For the leader: 'Quit looking this way!  I don't need healing.  The Defender on the other hand...'
For the striker: 'Get the Big Guy!  I'll take care of the rest!'
For all the oldies and newbies out there who play or want to play the game, the controller is the best role there is to play.  Who need cumbersome armour, large shields and weapons? I only need my staff to focus my magic.
Email ThisBlogThis!Share to TwitterShare to FacebookShare to Pinterest
Controllers are the Best Role to Play!
2011-02-15T11:11:00-05:00
Alton
Player Info|
Newer Post Older Post Home
Subscribe to: Post Comments (Atom)