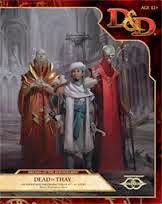 Guess who?  The Red Wizards are back and madder than ever. Last season the heroes temporarily set back the wizards and now the big bad Reds are back at it.

It all started when a Red Wizard comes into town to tell the players of the nefarious scheme they have planned, elemental nodes and all.....

Listen as Derek, Craig, and I talk about what happened at the table, some of the pitfalls or glorious moments, and some of the stuff that did not go so well.

Dead in Thay, a 6th Level adventure for this season of Encounters.  Have a blast!!


In the podcast, we mention the kickstarter for the upcoming (hopefully) documentary 'The Great Kingdom'. They need backers and I hope they do meet their goal.  For more information click on the link below to go to the kickstarter and show your support for this upcoming work.  The kickstarter ends on July 20th, 2014.