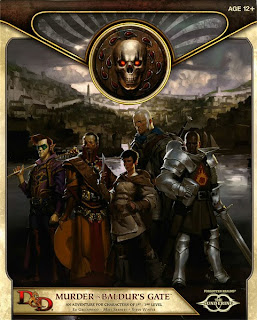 Stage 7 - Shut the Mouth, Kidnappings and a Senseless Massacre

Ravengard suspects the broadsheet "Baldur's Mouth" is a  medium for codespeak amongst the thieves.  Will the characters confirm these suspicions?

People are kidnapped.  Not an uncommon occurance in Baldur's Gate, but not in 40 years have any of the kidnappers murdered their charges.  Bodies are coming up everywhere and ransoms are overinflated.  Will the characters be able to save the poor soul they are charged to find and return to the family.

What is happening.  A simple protest turns into hundreds of dead.  Was it a happy trigger finger, or will the characters discover something more sinister in this senseless slaughter?

We come back with a chalk full of goodies this week.

What are your players going to do? Will they seek out the miscreants and bring them to justice?  How did they fare and how did they resolve this situation?