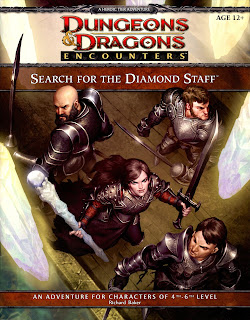 Once the orcs are defeated, the party realizes that this was only a diversion and the real battle is at the wizard's tower....

At the end of last session the characters hear the sounds of battle further up the road.  The last orc lets out his dying breath and the characters race to the tower only to find orcs pillaging the tower and keeping them occupied is the flesh golem; some sort of sentry to protect the wizard.  It seems like the golem has had its hands full and Imani lays spread out on the floor unconcious or dead, no one knows for sure yet.

The characters after having defeated the orcs and the golem find that Imani is only unconcious and his help have hidden during combat.

The Diamond Staff has been stolen.  Imani implores you to find the perpetrators and they follow them to their lair.

Follow up where we once again talk about the good, the bad, and the ugly of this season of D&D Encounters: Search for the Diamond Staff