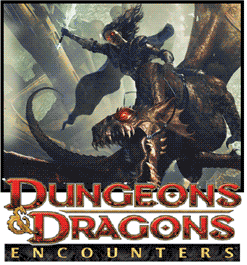 I really think I'm going to like DNDnext. There, I said it. Let me tell you a little story. Lately, I've been feeling a little nostalgic to play a little old-school D&D. To be clear on the subject, I'm not one of those people who bash one edition or the other. I like all editions: anything from 1st all the way to 4th. I've enjoyed many an hour playing these games, playing D&D to all hours in the morning, feeling incredibly tired the next day. I played D&D; pure and simple.

Don't get me wrong I love 4th edition I love the flavor, I love the mechanics, I love the monsters, but there's just something about 4th edition that is making me crave more than it has to offer. To give you little bit of a historical background I play D&D 3 times a week. I play game of 4th online using map tools with my gaming group from Toronto. I also DM D&D encounters at my friendly local gaming store and have been for the past 10 seasons. I also play a homebrew game of 3.5 edition each Friday night, and have been doing so for approximately 6 years.

I also had the experience this summer of play testing the DNDnext: Sorcere and the Clawrift during GenCon. Was probably the 1st time in about 20 years that I played without a map. I found I really enjoyed it. Coming back to the real world after GenCon I noticed that my attention for 4th edition was slightly waning, my interest for this edition slightly saturated. There seem to be nothing left to bring to the table. Playing D&D Encounters even seem to become tedious; always seem to be doing was following some railroaded adventure, killing monsters, and collecting treasure. Role-playing was an issue: little by little 4th edition seemed to suck away the little bit of the role-playing that was possible. I attribute this lack to the mechanics that have become prominent in these editions of Dungeons & Dragons. Now by these editions I'm talking more 3rd, 3.5, and 4th editions D&D.

At our FLGS, we recently started playing the 11th season of Dungeons & Dragons Encounters: War of Everlasting Darkness, and I find myself really enjoying this season. As previously discussed in Recounting Encounters, Derek and I spoke about some of the old-school feel that has accompanied the season. As a DM, I found that my role in the players enjoyment was lessened little by little by each edition; my involvement only needed on a rules ruling and hardly ever was there any room to tell a great story. Now once again don't get me wrong, 4th edition is plenty of potential for role-playing, but if I mechanics to get in the way. Players would no longer be coming up with interesting and thought-provoking criteria, they would just roll a skill.

But it wasn't just the players fault neither those of the mechanics. I found DM's became lazy, relying too much on the numbers listed in the adventures, not making rulings or giving synergy bonuses for great ideas. So players no longer had any great ideas to give, or if they did DM's would not make this associated adjustments for the great ideas.

Coming back to D&D Encounters: War of Everlasting Darkness, the two 1st sessions I played were extremely successful, bringing out in the DM's and the players, something I have not seen in years by Thunder. No longer does this feel like an MMORPG, but something with more depth, more imagination, and much more malleable to make it a pleasurable experience for players and DM's alike. These 2 sessions flew by, flew by like we had just arrived at the store (even though some of the sessions lasted 3 hours). I was able to make up things without having to deviate from the storyline, I was able to create things without having to ruin the players experience, I was finally able to give my players something that they needed and deserved in Dungeons & Dragons. I gave them a great adventure!

I think I'm going to like DNDnext, because all 4 editions of Dungeons & Dragons have something to bring to the table, and if the people at WotC are able to consolidate these 4 editions into one mega edition, I think us  D&D players will be extremely satisfied.

Have you had any experience DNDnext? If so leave a comment below. Do you play Dungeons & Dragons encounters? Tell me how they have gone so far.