GenCon 2012: D&D Championship, Fourthcore Team Deathmatch, and so much other coolness!

What constitutes the ultimate gaming high known to humankind?  I'll give you a hint: it has 93 hours, 2 tournaments, umpteen seminars, and a lot of cool people.  It's called GenCon, and this is the first year I have attended it and I can tell you it was the absolute best days of gaming I have ever had in my life.  My schedule was busy from start to finish and I came home absolutely exhausted. I will go over some of the things that I did over the course of the weekend and show some of the stuff I managed to pick up. 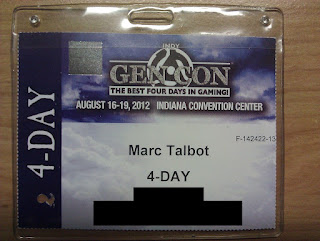 I overbooked myself.  There is so much stuff that I wanted to do over the course of the weekend, that I packed my schedule and had to miss out on a few of the seminars.  Some of the seminars I did attend were:

Next comes the games I played in.  Not having played anything but modular 4th and homebrew 3.5 as well as D&D Encounters with the same people over and over again (not that it's a bad thing), I got to play (whereas I am DM most of the time for all my games) and try out a multitude of characters I have never had the opportunity to try out before. 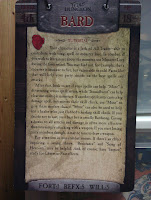 For a good explanation of it go here.  Long and short It is a Cross between LARP and tabletop D&D.  It is a dungeon walkthrough.  The props were cool and the settings were nice, but I don't think I would go again at 38$/pop.  It is not my thing. I played a bard.  Derek and I went through the dungeon, but there were 8 other people around us total group of 10.  It is too many people in order to get the full experience of it.  I would love to have gone in at adventuring party size (5-6 tops) to try and put our collective minds together.  There were just too many of us. I felt that my input into anything puzzle-wise was overlooked and deferred to the really experienced players.

The people in our group were awesome and extremely helpful, I would not take that away from the game.  It is worth trying once in my opinion. 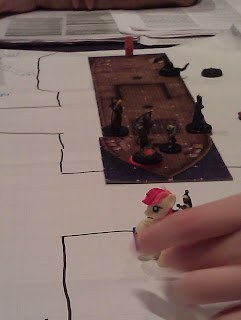 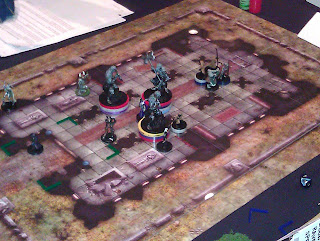 my 14th level goliath warden for the paragon tier adventure "Raging Darkness".  Fun was had by all. The DMs were pretty good also.

Very cool adventure and an unexpected limited edition drow d12?(I think that's what I got).  Chaotic story and my party was innocent until the end where I took out the main boss lady with my daily as well as 2 other party members (the assassin and the priestess).  Everyone at the end thought it was an awesome session with all the infighting at the end. This is probably the most organized DM I had through all of Gencon. Met a few cool people and enjoyed myself thoroughly

An event I was looking forward to.  I have not had much of a chance to playtest dndnext. I had a great time playing it.  It was unexpected and pleasant to play without a map and minis.  The DM was good and we had a lot of fun. I loved the fact that they had choices for the party on what they wanted to do and where they wanted to go, so if you decided to do more than one playtest, you could basically have another adventure to do, different than the one you did prior.

I ended up playing a Lawful Good Halfling Wizard Necromancer.

Stay tuned later this week for Part 2 of my weekend at GenCon.