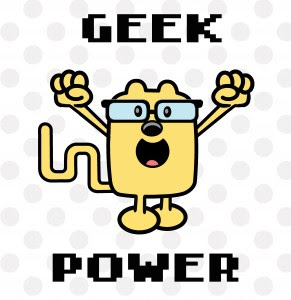 We have all probably heard the terms geek and nerd thrown our ways when we were lower level humans. Some of us may have gotten the daily wedgie, a swirly, bullied, pushed around and even excluded from many facets of the "sane" childhood.

The fact that pop culture in the 70s-80s was a horrible time for the "odd" group.  Movies like "Revenge of the Nerds(1984)", "Short Circuit(1986)", were awesome but you could not admit for fear of being "even more nerdy or geeky".

You had to cater to the "tough-guy" movies, like "Deathwish(1974)" or "Platoon(1986)", where the men were macho and good looking and the all loved them in the movies.
I got the word "Gecken" from wikipedia.   It is an Austian term which means Freaks and in nicer terms today people who are interested in intellectual pursuits for their own sake, and someone who is involved in technology and new media.

Nerd is a derogatory term used for people who are socially-impaired, obsessive and overly intellectual. this is from wikipedia.

Now all of this to say that the stereotype seems to be shifting that geekyness and nerdiness is becoming the new chic, the popular ones.  Gaming has helped with this, WOW, Skyrim and any other MMORPG has helped shift the balance.  One of the main contributors to this shift is the actors who now claim to be ex nerd such as Vin Diesel, Wil Wheaton, Robin Williams, Josh Whedon to name a few (see here).

I am particularly fond of a new site that recently showed their face on the web, created by Felicia Day.  The website is called Geek & Sundry.  This website hosts many geeky and nerdy programs, run by celebrities.  Take a look when you get the chance, I highly recommend it.

The website hosts The Guild, a web series for gamers.  It is fantastic.

I find it great that celebs have come out of their shells and are speaking out for the geek culture.

Josh Whedon has also produced a number of videos, and songs that strengthen the sense of what being a gamer is.  Take a look at the following:

Wil Wheaton also does a bi-weekly game review for all those into board games.  It's called Table Top and I highly recommend it.  He always has some great celebrities on it and it is quite entertaining. Take a look at the episode with Munchkins.  Makes me want to play.

I am glad for this and think they are doing great things for the culture that has been out there for generation yet hidden and shunned by society.

Give them a try and until next time, have a BLAST!