Review: Venom in Her Veins - A Forgotten Realms Novel

You know if you have read this blog often enough, that I am a huge fan of most fantasy novels based in the world of Dungeons & Dragons, whether it be Eberron, Forgotten Realms, plain old D&D and even Dark Sun (still not a fan of the world).

I highly respect the authors who take the time to write these books, all the hours they put into them and the numerous revisions and spelling errors they have to catch before the initial release of these novels.

I thoroughly enjoy most of the novels.  They are neither too deep, nor do they require post-secondary education to understand them (unlike a novel like Game of Thrones) and most do have very enjoyable story lines.

The novel "Venom in Her Veins" by Tim Pratt is no exception to this rule.  Based on the description of the novel by various sites, I was hesitant to buy the novel, but I said what the heck and bought it, since I had a coupon for 50% off the next Kobo book I bought.  I needed something to read and was not disappointed.
The novel starts us close to the city of Delzimmer where the Serrat family "Travelers" were harvesting the terazul flower, the backbone of the family business, bringing narcotic bliss to many people of the town.  The dragonborn Krailash, in charge of security during the harvest discovers an abandoned child at the site of a massacre. When his first in command Rainer is taken prisoner by denizens of the underdark.

The story fast forwards about 17 years later.  Zaltys the adopted child of the travelers head Alaia, is on the verge of her 17th birthday.  She has grown up with these people with no knowledge of her heritage.  On her day of acceptance, Zaltys is given a plethora of gifts and is officially accepted in the family.

Rainer reappears and recounts what happened to him for the last 17 years.  Zaltys thinks her family may still be alive and prisoners of the derro.  She and her cousin Julen go into the underdark to attempt to free her family.  The rest would be spoiler.

The novel, even as simple as it is, was a great joy to read.  It was good lite reading.  I love novels that try to encompass most of the playable character races of the D&D world. The novel has a plethora of characters, tieflings, eladrin, dragonborn, human, derro, grell, yuan-ti, shadow snake, beholder, quaggoth, kuo-toa and probably others I have missed. 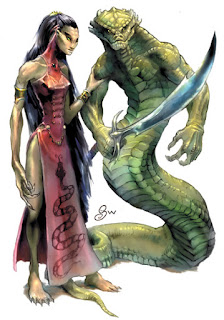 The novel starts off a little slow, and introduction of the main character takes a little time but is well worth the wait. Zaltys is a individual who is completely at ease in her wilderness setting, yet is always under constant surveillance by her mother.  As soon as she turned seventeen, the mother gives her responsibility and then...something happens, she runs off to the underdark. It is fairly predictable in terms of novel and stereotypical in terms of story line, but I still have to say that the author still manages to grab my attention

In terms of a hero, Zaltys falls into the category of stereotypical, yet Pratt seems to flavour her with the cross of Yuan-Ti which had me wanting to see what kind of senses she would inheret from her bloodline(you have to read it to understand what I am saying).

The writing is pretty amazing, nice and neat and flows quite well.  The explanations of the Traveler and Guardian part of the Serrat family are doine in a was that it literally meld into the storyline.  There is no need for any return to understand the story, no interruptions to think about what just happened; it is overall great writing through and through.

I love all the other characters in the story. They are quite comical and there is quite the variety of personalities that Pratt seems to bring together with his writing.  The only downside to the story is the ending.  The story seems to have been built up around this character and I was disappointed in the ending.  I guess disappointed is probably a bad term, but that was my feeling.  There was just not enough.

There might be a couple reasons for this: maybe he is writing a sequel to the novel, maybe that is how he wanted it to end(us wanting more). Whatever it was...

I highly recommend this novel, if not for the story line, then for the writing itself.  Pratt does a fantastic job of keeping the flow of the story alive and he kept my attention for the whole novel (which kept me glued to my Kobo for the whole day). If you are going to read the story, keep an open mind to the simplicity of the story line, the themes, the stereoptypes, because I think you will be enthralled by the fluidity of the words on the pages.

I hope that Pratt is writing a sequel to this story, ar at least a story with some of these characters.  I would love to see what he would have in store for Zaltys and her companions.


Have you read this novel?  If so, tell me what you thought about the book, and whether my assumptions were correct.  Until next time have a blast!
Email ThisBlogThis!Share to TwitterShare to FacebookShare to Pinterest
Review: Venom in Her Veins - A Forgotten Realms Novel
2012-05-30T11:03:00-04:00
Alton
Reviews|
Newer Post Older Post Home
Subscribe to: Post Comments (Atom)