Review: The Mark of Nerath - A Dungeons & Dragons Novel 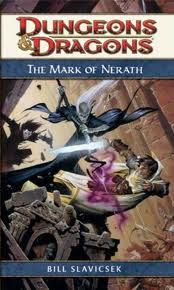 When I discovered the Dungeons and Dragons novels, I immediately jumped online and bought quite a few of them for my e-reader.  One of the first novels I read was this one (prior to my reviewing books).  It took me awhile to get back to this one but I guess I saved one of the good ones to review.

This novel, by Bill Slavicsek, is one that is set in the world of D&D.  It is his first novel, and I hope it is not his last.  When 4th disposed of releasing Greyhawk and instead invented this world for the players to do with as they saw fit, what other perfect setting for a book such as this one.

This novel introduces the continuing series of The Abyssal Plague.  It is a great introductory novel, introducing us to some of the characters we may love for future iterations of Dungeons & Dragons novels.

A dragon obliterates an adventuring party, the two survivors seeking vengence; a dragon and his kobold wyrmpriest; an undead mad emperor and his death knight bodyguard sent back to the material plane for some ungainly errand for Orcus; a young cleric's world is overturned in one day and his quest to discover why people are trying to kill him; a revenant with no idea on his mission with only feelings to guide him; a wizard apprentices first adventure; a single-minded creature, and a paladin of Bahamut with his warlock companion accompanying the unwary wizard.

Right from the prologue, the story introduces us to some of the major players of the series.  We are introduced to Uldane and Shara, survivors from the conflict between their adventuring parties and the great green dragon Vestapalk and his servant Tiktag.  The story continues to introduce many of the other characters of the story.  Falon, Darrum, Albanon, Rohgar, Tempest, Erak as the protagonists, Bella, Magroth, Kalaban and  NuAlin as the antagonists of the novel.


The story moves at an ok pace, with a moderate amount of description of the characters surroundings.  I guess the thing I liked the most is knowing where I am in relation to the world around me.  I have played all 30 levels of modules when 4th was relesed and everything was familiar to me.  I think for someone who is getting into the game, or just reading this novel, would not understand all the significance of the places mentioned in the novels.  Fallcrest, Winterhaven, Seven-Pillared Hall are just some of the examples of places found in the modules.  Since I have played them they are all vivid in my mind. I found that the novel was a good introduction to the world of D&D and it seems like the author is purposely taking the reader all over the place to familiarize them for future novels (which I can say could be extremely plausible).

I like how the author brings all the characters together as if fate had a hand in it.  I know that it is stereotypical, but the author adds a little flair of his own to the mix.  Even the villains are brought together over time for a massive royal rumble at the end of the novel.  The writing is clear and concice, and the characters are believable  and consistant.

Overall, I like the writing style of the author and I like the way portrays the characters throughout the novel.  I would say this is a good read, but for those who are not familiar with the world of D&D, then be prepared to make reference aften to the map at the beginning of the book.  Just like any other new type of novel, you have to get used to world. (see my review on The Cloud Roads)