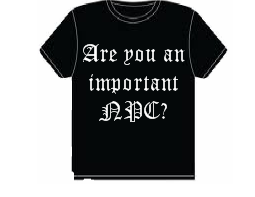 I am trying to remember something of the past, a creature, person, or anything else that I have ever encountered in my whole career as a RPGer.  Any memorable occasion where someone or something helped, interacted with us, anything!!!

Surprisingly enough, I can hardly even remember a handful.  Maybe that is why gaming sometimes can be such a drag to me.  The NPC's I meet tend to be lackluster, impersonal, unenthusiastic and unimaginative.

As a gamer, Most NPC's get the job done and bring you to the next battle. Unfortunately, in order to get the full "nine yards' of the gaming experience, you need a combination of three things.

The first is the story-line. As we all learned in English class, there is no story without conflict.  There needs to be conflict for the story to move along.  It could be anything from a side trek (one conflict), to a super adventure (where many conflicts are present and intertwined).

The second thing you need is the encounter. You need to populate encounters with monsters, traps, hazards and anything else you think the PC's might face during your encounters.

Lastly, we need to create NPC's.  NPC's come in all shapes and sizes.  We also use them for a variety of purposes.  Some of them we use for as fodder, barely noticed and not really that important - good for maybe one, or two encounters maximum.  Other NPCs are so important that they cast a shadow over everything the PCs do, a nemesis, someone who tried to hamper their efforts at every turn.  I am not just talking about character NPCs, but monster NPCs also.  Imagine if Skald had survived P1 and for the next ten levels was planning his revenge on the PCs.

Here are four steps that are essential for an effective NPC: Choose your race (monster or humanoid), choose the reason for the NPC: whether it will be limited(per adventure) or recurring and choose a tie into the story line: either via PC backgrounds, or what the story line calls for, and lastly; show - don't tell.

When you start the creation of an NPC you want to choose a race that is conducive to the story line.  I know it sounds extremely simple, but I have seen DMs who have put a monster class where a monster class should not be placed and made for an awkward situation.

Choose the reason for your NPC and choose a tie-in

Ask yourself what you want your NPC to accomplish by introducing them into the story line.  Do you want to make the character reappear adventure after adventure (recurring) or do you want a one shot deal.  Then you would start to flesh out the character.  For one time NPCs, keep it simple, maybe a name and a little attitude.  For recurring characters, flesh them out by using your party's story background or anything else you may want the NPC to do for the story.

Then add the abilities of the NPC.  Use the Adventure Builder from D&D Insider and modify the names and the powers on an NPC in the list.  You also have the ability to change the NPC level and them print them off.  You can also create your own from scratch.  It is up to you on how you want to create them.

I really mean it - show it.  I don't mean using photos and minis.  Give vivid descriptions of the the NPC, not just a name.  Give them a voice, change it up from NPC to NPC.  When the NPC is first introduced, use the following list I provide to give a description that will blow your PCs socks off.  Here is an example:

This gentleman makes you think of a brilliant inventor. He has slanted violet eyes that are like two windows on the evening sky. His luxurious, straight, sand-colored hair is very long and is worn in a handsome, dignified style. He is very tall and has a broad-shouldered build. His skin is white. He has a large nose and small hands. His wardrobe is mysterious and severe, with a completely red color scheme.


Use this list to help you create some of the best NPCs that will wow your party.


Enjoy your creations!  Hope they serve you well.